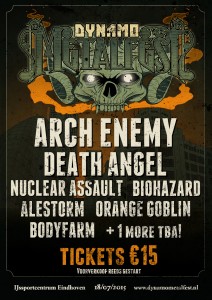 The line up is almost complete! Having already announced Alestorm, Nuclear Assault, Body Farm, Death Angel, Arch Enemy, Dynamo Metalfest are happy to add BIOHAZARD and ORANGE GOBLIN to the line up.

“We are very pleased with the final names for the line up” says Tjerk Maas, organiser of Dynamo Metalfest. “With these two bands we have completed a strong and diversified line-up and have done so with a low entry fee of only €15 too. We now have a great hard rock / metal band in the form of Orange Goblin. And what can we say about Biohazard? An older visitor to the festival will know that this is a recognised name on the scene! And a younger visitor has the opportunity to get to know a legendary cross over band.”

The UK’s Orange Goblin are no strangers to the festival circuit, with Graspop, Hellfest and Roadburn all having welcomed the hard rockers previously. Last year, the band released their new album, Back From The Abyss, a future classic filled with fist pumping metal anthems.

Biohazard have been going many years, and have notched up many festival appearances along the way – and in the past has gotten entire fields at Dutch festivals jumping to their mix of metal and New York hardcore. And years on, the band are just as energetic as in the early days – moshpits are guaranteed!

There will be one more addition to the line-up; the winner of the Battle of the Band. The final of the competition, where the winner being announced will take place on May 30 at Dynamo. The application deadline for the competition is March 31. Click HERE for more details.

In order to make the festival accessible to as many people as possible, tickets are just €15. These can be bought online but can also be purchased at all Primera outlets and at the box office of the Dynamo Club.

Dynamo Metalfest will take place on Saturday July 18th 2015, at the semi-covered ice rink in Eindhoven. There will be a total of eight bands hitting the stage, as well as a metal market and refreshment stalls.