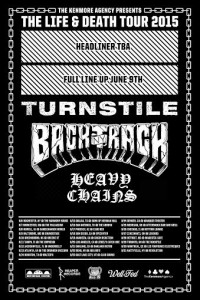 The second annual premier hardcore tour, Life & Death, has announced its first batch of confirmed bands: Turnstile, Backtrack and Heavy Chains. These three bands will appear alongside two more headliners, which will be announced June 9th, throughout the duration of the four-week-long North American tour spanning throughout August. Check out the dates below.

First announced is one of underground music’s most interesting bands: Turnstile. From the release of their 2010 demo to their 2011 Pressure to Succeed EP, the band has walked a path all their own. A path that has quickly brought them a rabid following based off of their groove driven melodic energies and insane live shows. They released Nonstop Feeling earlier this year on Reaper Records, and the album sounds bigger and louder than anything previous. The bright color scheme represents the idea of raw, unbridled expression, positive or negative, that is delivered in each of the twelve tracks. From the signature artwork to the energy infused tunes, this record creates a vibrant slam of emotion that defines Turnstile more than ever as a band leading their own way.

Supporting band Backtrack hails from New York and has spent the last year and a half touring relentlessly on their debut album for Bridge Nine, Lost In Life, which was called a “damn awesome slab of modern NYHC” by Decibel Magazine. The band has become known for their insanely energetic and incendiary live shows and their performances will be no different along this Life & Death tour.

Also confirmed is New Jersey’s Heavy Chains who have been making waves along the East Coast since their inception. The band has appeared on seminal festivals such as This Is Hardcore, United Blood, Black N Blue and many others and this tour will mark their first out West and back of 2015.

Stay tuned for headline slots to be announced and tickets to go on sale for the Life & Death Tour on June 9th.