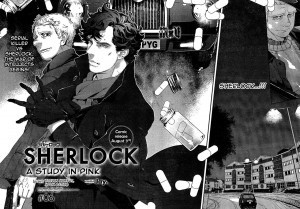 This June, Titan Comics is thrilled to unveil Sherlock: A Study In Pink – a manga comic series adapting the episodes of the smash-hit Hartswood Films TV show starring Sherlock Holmes as played by Benedict Cumberbatch (upcoming Doctor Strange) and Dr John Watson as played by Martin Freeman (The Hobbit)!

Originally airing on the BBC in 2010, the TV show is a reimagining of the Arthur Conan Doyle classic, following Sherlock Holmes and Dr John Watson’s adventures in 21st Century London. A fourth series of the show has been commissioned and set for a 2017 release.

Announced at ComicsPRO retailer summit in Portland, Oregon, the manga comic adaptations of Sherlock episodes co-created by Steven Moffat (Doctor Who) and Mark Gatiss (The League of Gentlemen), and based on the original Arthur Conan Doyle stories. The publications, illustrated by acclaimed manga illustrator Jay, will be printed in English for the first time in the US & UK with extended page-counts; perfect for comics and manga audiences alike!

The comic series will feature all new art and covers by a host of top comics talent including fan favorite artist Alice X. Zhang (Doctor Who, The Blacklist)!

The first story, Sherlock: A Study In Pink #1 hits stores in June 2016 and will also be available on digital devices.