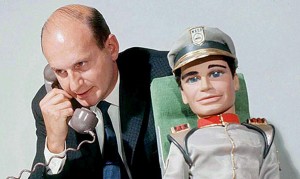 Anderson Entertainment today announces the launch of Andercon 2015, the annual convention for fans of Gerry Anderson, MBE and his award-winning cult hits such as Thunderbirds, Captain Scarlet, Stingray, UFO and Space: 1999. The convention will take place 13-14 June 2015, with a launch event taking place on the evening of 12 June, at the Athena Leicester, a stunning, fully-restored 1930s cinema in Leicester’s Cultural quarter, with guests from the cast and crew of six decades of Gerry Anderson production attending.

Andercon 2015 looks set, once again, to attracting fans of Gerry Anderson’s productions from all over the world, as Jamie Anderson, Gerry’s son and Managing Director of Anderson Entertainment says, “This year’s celebration of the work and worlds of Gerry Anderson will be a very different event to last year’s – not only an unconventional venue, but we’ll be offering incredible previews of upcoming projects, as well as talks, seminars, screenings and workshops, Beyond that you’ll see a wide range of displays including original puppets, props, models and costumes. There will also be a collection of vehicles and reproductions of some stunning full-sized set recreations.

“We’ll be looking at the Gerry Anderson legacy, including a launch event with a look back at his personal story, with the presentation of ‘A Thunderbird At Bomber Command’ – a talk by Sean Feast on Gerry’s brother and inspiration, Lionel Anderson. We’ll also be looking forwards with previews of new productions coming out later this year and beyond, including Firestorm, Zeroids vs Cubes, Gemini Force One and more.

As Jamie Anderson sums it up, “It’s a great chance to meet the cast and crew in person and to see the original props up close. We’ll have exclusive screenings, panels and workshops, Q&A sessions and quizzes and costume competitions with super prizes. Unfortunately, the venue has had to limit the number of people allowed, so I advise anyone who’s interested to secure tickets now while they’re still available.”

Tickets are available now from www.andercon.co.uk