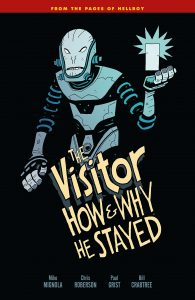 They were there at the beginning of Hellboy’s story, and in some way, shape or form, they were almost certainly there at its end. Just because we didn’t necessarily see them, it doesn’t mean that they weren’t there. Who? Why, the aliens* of course. After all, Hellboy had no idea that The Visitor was there, watching and observing him for most of his life and if Big Red didn’t know, why should we? Sent to assassinate Hellboy at the moment of his “birth”, one of the last members of a near immortal alien race who were all but wiped out  by their catastrophic association with the Elder Gods and Demons who spawned the BPRD’s most famous agent, fails in his duty for the most “human” of reasons. Because he can’t rationalise the death of an infant, regardless of who, or what, said child is destined to become. Vowing to stay behind and correct his mistake should Hellboy show any sign of becoming the creature that he was “supposed” to be, the Visitor charts Hellboy’s life on Earth and how his interaction and involvement with humanity, ultimately alters him and his so-called future. But  just as Hellboy changes thanks to his association with homo-sapiens, so does the Visitor, and his mission gradually becomes less and less important to him as he embraces all that it means to be human and ultimately sacrifices everything that he once was to ensure that Hellboy continues in his role as humanities protector against the things that go bump in the night.

Mingola and Roberson’s story, while incorporating all of the wonderfully strange elements that make up Hellboy’s universe, minimises the amount of conflict against cosmic horror and instead focuses on its central idea, the one that blazes away at the heart of The Visitor: How and Why He Stayed.  What it means to be human. It’s a tale of learning accept the best, and worst of mankind’s traits and how each has shaped and will continue to shape us. And it’s a story of love, regret and understanding that the future isn’t definite, it’s malleable and can be changed by the simplest of things like a chance meeting, or a relationship or choosing to take a different path than the one that life presents to you. Lent an air of pulp adventure, retro noir and Lovecraftian weirdness by Paul Grist’s magnificent artwork, The Visitor isn’t really, despite it essentially being a Hellboy fable, about fighting back against the darkness and all manner of monstrosities, instead it’s about a stranger in a strange land who gradually comes to think of the alien environment in which he has deliberately cast himself adrift, as home.  Come and meet The Visitor. You’ll be glad he stayed…  Tim Cundle