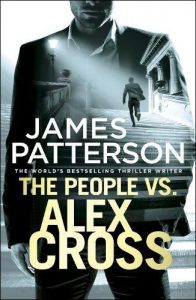 Conan Doyle had Holmes, Cussler had Pitt, Child has Reacher, Harrison had DiGriz and James Patterson has Alex Cross.  Authors and characters whose lives and fortunes are hopelessly intertwined and while the former aren’t necessarily dependent on the latter, the same cannot be said of their literary vessels whose very existence is dependent on the whims of their creators.  That said, I feel like I’ve got to make a confession and come clean as far as Alex Cross is concerned. While I’m sort of familiar with his exploits,  my familiarity stretches only as far as the two films in which he was played by Morgan Freeman, Kiss the Girls and Along Came a Spider. It isn’t much, I know, but at least it’s something. Or at least it was until I was sucked into his ongoing adventures in The People vs. Alex Cross, the twenty fifth novel to feature James Patterson’s hero.

Wait a minute, this is the twenty fifth entry in the Alex Cross series? Just think about that for a minute. Twenty five books about a single character. That’s a lot of mythology and lore to try and wrap your brain around, especially if all you know about previous twenty four books is what you’ve gleamed from four hours of Morgan Freeman thwarting madmen, serial killers and kidnappers. So, as I started reading The People vis Alex Cross I was a little nervous that I’d be submerged in a world of history of which I had no knowledge and would end up getting lost about fifty pages in, suffering some sort of cranial melt-down which would inevitably be followed by a midnight, caffeine induced freak out in which I scoured the internet desperately trying to figure out who everyone was and what the heck was going on.

But the more I read of The People…and the further I got into the story, instead of the chances of a catastrophic mind collapse increasing, they actually eased with every sentence I consumed.  Instead of dwelling on, and building on Cross’ previous experiences, Patterson only incorporates what is necessary to further the plot of The People, and even when he does include it, it’s readily and easily explained in a way that guarantees that newbies won’t be left behind and die-hard fans won’t roll their eyes while muttering “I already know this, can we just move on already”. Patterson’s fluid, engrossing and easy to read prose ensures that you’re hooked from five pages in and won’t want to out the book down until every sub-plot and thread has been fully explained and concluded in satisfactory fashion. Which I hasten to add, they are. If you looked up the term ‘page-turner’ on the internet, next to the definition would be picture of this book’s dust jacket; and even though it’s a slightly weighty tome and comes in at around four hundred and something pages, I happily, and completely, digested it in a single afternoon sitting*

Then there’s the plot. It’s a combination of court room drama – in which Alex Cross finds himself accused of murder following an apparent unlawful shooting – and taught thriller – as he and his former partner race against time to help the victims of a gang of kidnappers who use their prey in a series of horrific internet games and personal drama, as Alex and his family attempt to adjust to the reality of the professional, and personal, situation that he’s been forced into. Patterson deftly weaves each facet of The People… together and the end result is a gripping, focused, exciting and absorbing tale that it’s almost impossible to put down. I’ve got a lot of catching up to do and I might as well get started straight away. There’s twenty four other Alex Cross books that I need to read… Tim Cundle

*Or, more precisely, six and a bit hours.