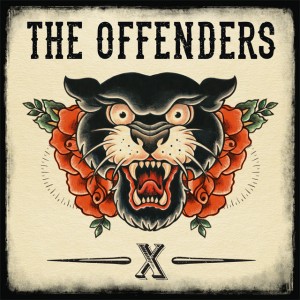 The Offenders – X CD (Destiny)
Sixth album from Italians-in-exile and general good time guys The Offenders. This is a fitting musical tribute to their adopted city of Berlin as this is a musical and cultural melting pot of styles. With both feet firmly based in the ska sounds, they pull on their Doc Martens and tonic suits and invite you to dance your way through this album. The Two Tone ska tones are simply the basis as The Offenders’ sound is a happy marriage of soul, mod, powerpop and punk rock too. There is far too much going on to pigeonhole this band, they kind of don’t care what they style is, as long as it sounds good and you can dance to it. I like this attitude and it makes the songs flow naturally without ever sounding forced. Although there are good times tunes on here such as “Two Tone Time”, the band also has a social message and that is reflected in a melancholic vocal delivery. Although I have not seen the lyrics yet, if previous albums to go by there will be messages of hope and frustration in equal measures. A nod to their homebase sees them also sing a couple of tunes in German. Overall this album works really well with songs to make you laugh, cry, drink and dance too and experience the colourful world of The Offenders. Tom Chapman