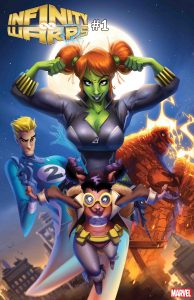 What happens when you look into the warp? You find some of the most exciting and unique Two-In-One heroes that the Marvel Universe has ever seen! A little scary, a little intriguing…just what are the secrets behind their stories?

How did a covert program of the Green Room create the gamma-powered Green Widow? What are the secrets of the siblings Mister Invisible and Hot Rocks, the Terrific Two? And can Moon Squirrel and Tippysaur save the planet from its most dangerous threat ever? You’ll have to pick it up to find out!