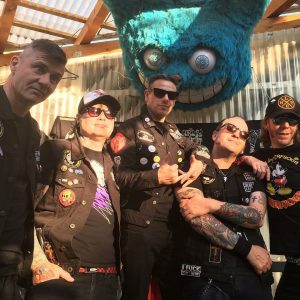 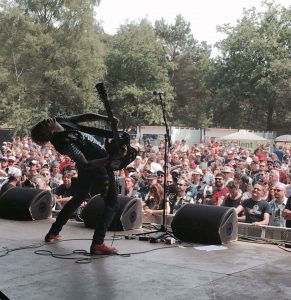 Love ‘em or loathe ‘em, there’s no way of ignoring ‘em! The Hip Priests are Nottingham’s deep down and dirtiest delinquents. With a new album on the way, it only seemed right that Mass Movment’s Ginge Knievil chewed the rock ‘n’ roll fat with Lee Love and Austin Rocket. Lube up for the ride, scumbags!

MM: How are you guys?

AR: Good. New album’s finally fuckin’ finished and mixed. Just gotta get it mastered and find someone to release it now. Looking forward to seeing our Swiss sisters Bitch Queens next week for those three shows.

LL: Yep, fabulous as ever, mate – if fabulous means eternal despair at the state of the nation and the slow march towards death and the enduring lack of wider musical recognition [laughs]. Oz sounds more optimistic… as ever!

MM: [laughs]. You wanna tell the Mass Movement readers more about those shows next week. You’re taking a bunch of bands with you, right?

AR: Yeah, the Queens had been asked to play the Turbojugend party in Bristol and they asked if we’d sort them a couple of others. So, being the lovely people we are, we booked London and Brighton and asked Rotten Foxes to jump aboard too. Then, following continual stalking of Lee by their bass player, we thought it’d be safer to ask Deathtraps to join us too rather than upset him and risk the rage of a spurned lover!

MM: When you say “the despair at the state of the nation,” Lee, I guess we’re talking you guys labelling Britain as “Shit Island.” You okay to expand upon this? I noticed that people seemed to disagree with this sentiment online.

LL: Ahhhh. I think I/we started banding it about years ago but, yeah, since June 2016 I’ve just despaired more. I know and understand full well about how disengaged and excluded many many people are; generations of whole communities etc, but I just feel so frustrated at it all and how it all just seems to be going further down the shitter. We’re already the laughing stock of Europe and we’ll soon be sat on some piss poor island that hardly produces anything; that has no health/care services – unless you can pay – and where our enduring class system will be even more evident than it’s been in fucking generations. I could rage about all of this for days and do. Yep, it’s pretty shit.

MM: I’d say that’s a pretty fair assessment. I guess No Time (Like Right Now) reflected those thoughts exactly. Were there any reservations about releasing a 10 minute epic? You managed to pull it off [laughs like Sid James].

LL: We’re so full of ourselves and our abilities we can pull anything off [laughs]. Oz?

AR: Nah, I don’t think we had any reservations at all. We just wanted to push ourselves a bit more and see if we could pull off the whole MC5 style bombastic anthem, which is the way it had to go from Lee’s lyrics. We figured if anybody didn’t like it then it’s tough shit really. We kinda expect that if anyone likes us they’d be into the same bands that influence us and if you don’t own High Time then you’re kinda clueless really [laughs].

LL: Yeah, I’m sure many people still think we’re still some sex-obsessed third-rate New Bomb Turks, but we listen and take on loads of shit. Our single Golden Black was meant to have been us playing northern soul, and No Time was – alongside the MC5 – us indulging our love of the ‘orrible Who too.

MM: Golden Black seems like a lifetime ago! There’s no disputing The Hip Priests’ recording output. How many singles are you up to now? I’ve lost fucking count!

AR: 24 to date and a couple more on the way, plus the new album!

MM: And last year saw the Those Fuckin’ Boys (A Decade of Disdain) compilation to celebrate the singles and 10 years of the band. Did you think you’d make it this long without self destructing?

AR: Well, we lost a few members along the way but the driving force of the band has always been me and Lee. We manage, book the tours, sort the merch, releases, artwork, etc, etc between us. We’re both obsessive, stubborn, impatient weirdos that have kept pushing this thing along at a rate of knots really. I dunno if that’s a good or bad thing sometimes [laughs]. And we’ve both come close to self destructing at times while stupidly ensuring we were last men standing at various after-show parties!

LL: In a way we do keep self-destructing… every time some fucker leaves! But like coachroaches we just survive. We just feed off of the adversity and misguidedly thinking that we have to again “prove” ourselves. Takes more than the odd stroke, overindulgence or heart attack [laughs]. As regards the band though, there’s a song (From Here to Adversity) on the new album all about it that says “this dies when we three say” …and that’s about it!

MM: Talking of members, you’ve recently added Silent Mike as a second guitarist. How’s he getting on? Have you broken him yet? [laughs]

LL: [laughs] The greatest irony of it is that us bastards – who I believe have some reputation as being fuck-ups – then recruit a straightedge guitar player. You couldn’t make it up!

LL: Joking aside though, Mike got to join his favourite band! It’s like a garage rock ‘n’ roll The Voice – without the voice [laughs].

MM: For those who don’t know, tell us a bit about the Spasm Gang fan club. What’s the deal? Can people still sign up? Do you get exclusive signed y-fronts?

AR: Yeah, Spasm Gang is going strong. 200 members worldwide, stretching from Australia to Brazil and everywhere in between! People can join via thehippriests.bigcartel.com for strictly limited exclusive SG versions of every release we put out. There’s a members only Facebook page and ya get a load of patches and a swanky membership card when ya sign up. Kinda like the Dennis The Menace fan club I joined as a kid [laughs].

MM: You two make up half of Motherfuckin’ Motherfuckers. There was a yarn about how the band came about. I heard it was based around a bet. Care to spin that yarn?

AR: It was Mel who had the original idea one night when he was pissed in a bar in Basel. Whenever we play with the Queens, Mel always gets up to play with us and me and him get to live out our guitar wanker fantasies [laughs]. So, he messaged us all and said let’s do a one-off project but both bands were so busy it never seemed to happen. Then, it turned out there was one free weekend and me and Lee went over but ‘cause it was so last minute nothing was written or rehearsed. Lee got drunk, said he’d got a couple of ideas; Harry did too and so we said fuck it, let’s see what happens. After 12 hours in Harry’s studio we had eight tunes written, rehearsed, recorded totally live and were pissed out our brains. When Harry went to mix it a couple days later we were all shocked how fuckin’ good it was so we got a couple of labels on board and stuck it out. We keep talking about doing another and playing some shows but finding time is the problem. But ya never know.

MM: What bands should we be keeping an eye on at the moment?

AR: I’m still as obsessed with Aussie punk as I have been since I discovered The Hard-Ons at 17. So, the best bands out there for me are Clowns, Grindhouse and C.O.F.F.I.N. UK wise, we’ve got two of our faves out with us next week in Rotten Foxes and Deathtraps. More locally, TV Crime and Grey Hairs are the best bands in Notts.

LL: Apart from us naturally [laughs]. And don’t forget our boys Bitch Queens, Scumbag Millionaire, King Mastino, Hells Engine, The Satanic Overlords of Rock ‘N’ Roll. There’s lots of bands we’ve gotten to know and maybe helped out (and vice versa) over the past, countless years.

MM: What do you think’s left for The Hip Priests to achieve? Without a bullshit manager, you’ve achieved what many underground bands can only dream of achieving.

AR: Yeah, the thing I’m most proud of with this band is what we’ve achieved so far all through our own hard work and on our terms. We’ve never kissed anyone’s arse for a show or asked for a foot-up from anyone, and we’ve gladly helped out a lotta bands too – bringing Euro bands over here and suggesting bands to labels to get them a release. Despite that, the problem we’ve always had is exposure to a bigger audience. We’re still very much under the radar to a lot of people and for that to change we need a bigger label with PR and a decent booking agent. We came close to signing to a big label last year before it all fell apart so at the moment we’re sending the new album round to see if anyone will pick it up. If not we’ll do as we’ve always done but it would be a shame for this one not to get the bigger release it deserves as it’s by far the best record we’ve ever made. We’ve been lucky enough to have shared a stage with virtually all our favourite bands over the years but the final one that I’d love to do is play with Gluecifer ‘cause they’ve been a huge influence to us since day one.

LL: Yeah, something like that. How hard do you have to work to get a little bit of recognition on an island that has nigh on forgotten how to rock ‘n’ roll? [laughs]. Fuck em! Enjoy us while you still can people, that’s all I’m saying at this point.

MM: Nice one, boys. Thanks for chatting. The final words are all yours. I’m sure you have something to say! GO!!!

LL: We are STILL the fucking Hip Priests and you’re not.

Check out The Hip Priests back catalogue here