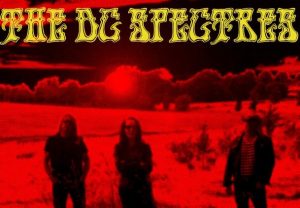 MM: Hey, tell the Mass Movement readers who The DC Spectres are and what you’re all about.

DC: Sure, DC Spectres started in July 2016. Originally, I was a singer/bass player and switched to guitar as I was getting pissed off with the bands I was playing in folding. I couldn’t find a drummer and a gig was booked in for August so Lyse – my wife – said she’d help me out. I bought her a stand up cocktail kit and we both tried to learn our new trade as it were. Vegas Mike joined early this year on bass as we felt the sound needed filling out so new ideas could work properly.

MM: I’d say that stand up drum kit is integral to your sound. Along with Lyse’s playing style of course. Would you agree with that?

DC: Yeah, I guess it is. Lyse had no drumming background but thankfully has rhythm and was able to pick it up very quickly.

MM: I see Rat Scabies produced your first album. How did that come about?

DC: I’ve known Rat since 2000. He produced an album of one of my former bands. That led to jammimg with him and Dave Tregunna in a band called Swan Burger, which unfortunately didn’t get off the ground. That led me to me singing in Scabies & [Brian] James’ Damned Damned Damned. We keep in touch so I asked him.

MM: Do you prefer the surroundings of modern studio gadgetry or is the D.I.Y. approach favourited for The DC Spectres’ sound?

DC: I think it’s more the approach and the confidence when going into the studio. The new album was very relaxed but focused so it was done and dusted in 13 hours. The first album was nerveracking as Lyse was very aware of Rat being next door recording us, and that Rat wanted me to sing and play live. I think if you spend too much time refining your studio sound the further you drift from your live, true sound.

MM: And how would you describe The DC Spectres’ live experience for those who haven’t seen you yet?

MM: What influences you outside of that genre? 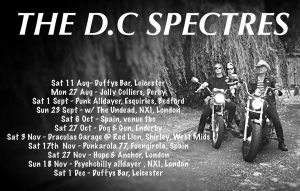 MM: Tell us a bit about the Sonny Vincent track on the new album and it’s background for those not in the know.

DC: Sonny and I met at a festival many years ago and realised we were on the same record label. Our friendship grew from there. We kept in touch and he offered to produce my old band, which was cool. He came and stopped with us a few times so it was natural to try and raise some funds when his family accident occurred. Marco from Ghost Highway was happy to release the track as a digital download and send Sonny the funds raised.

MM: An almost impossible question I know, but off the top of your head, what five albums could you not live without?

MM: Thanks for the chat! The final words are all yours. GO!

DC: Bands and promotors, get in touch! Head over to our Facebook page and give a like, and also our BandCamp page [links below] for music and merch. Thanks to you, Ginge.

Listen to The DC Spectres here