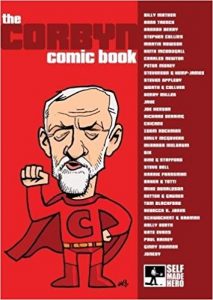 Occasionally the political status quo and established order are subjected to a radical paradigm shift that subverts normality in such a powerful way that it generates something feared in the halls of Whitehall and scarcely seen in everyday society. It creates hope. Which is exactly what happened when Jeremy Corbyn* a life-long, backbench Labour politician who cared more about his constituents, people and his belief that everyone should be treated equally and given the same opportunities in life regardless of their social position, was suddenly catapulted to the forefront of mainstream politics when, despite the seemingly insurmountable odds and obstacles placed in his path, he was elected leader of his Party. And while the predominately right wing National Press went into meltdown and attempted to demonise and vilify him, his message of equality and opportunity for all resonated with the general public and transformed this most seemingly ordinary and decent of men into a cultural and social hero. Hope it would seem, really is a powerful weapon.

All of which sort of brings us to The Corbyn Comic Book. To celebrate the fact that a politician that the masses can actually believe, and have faith, in made it through, and bypassed, the cut throat defences of Parliament, SelfMadeHero sent out a call to artists and writers everywhere, asking them to contribute something about Jeremy Corbyn to this book. They listened and here it is.  Like all good anthologies, the subject matter and style of the stories and artistic vignettes varies greatly and runs the gamut from incredibly personal and introspective musings to full blown tales of heroic daring do during Prime Ministers Questions in which the eponymous underdog vanquishes the Maybot and her minions.  Every element of the public and parliammentary persona of the Labour leader is scrutinised and utilised to magnificent effect and whether he’s making jam or investigating and halting Tory cultists, it’s a hugely enjoyable read that emphasises and extols the idea that everybody is, and can be, extraordinary if they’re just given the chance, and means, to do so and that decency and a desire to change the world for the better, for the masses and not the few, are traits to be admired and embraced. All together now, “Oh, Jeremy Corbyn…” Tim Cundle

*I like the guy. I disagree with him on some things and wholeheartedly agree with him on others, but overall I think he’s a good man and I’d rather him see him in Number Ten than any bloody awful Tory or wishy-washy, half baked, Conservative by design, Liberal by choice Blairite.