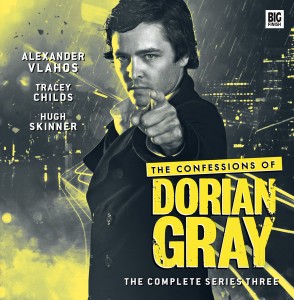 The Confessions of Dorian Gray: Series 3 – Performed by Alexander Vlahos, Sophie Wu, Bernard Holley, Edward Harrison, Alex Jordan, David Blackwell, Andrew Pepper, Barnaby Edwards, Blake Ritson, Terry Molloy, Nicola Bryant, Toby Longworth, Annette Badland, Christopher Allan, Sean Biggerstaff, Laura Doddington, Tracey Childs, Miles Richardson & Hugh Skinner & Written by Xanna Eve Chown, Scott Handcock, Cavan Scott, Gary Russell, Roy Gill, David Llewellyn & James Goss – 5xCD / Download (Big Finish Productions)
Dorian Gray died. After more than a century and a half of life spent watching his friends and lovers wither and decay; coming face-to-face with the arcane and supernatural on more occasions than even he would care to remember, and having tired of the eternal game he finally reneged on his deal, destroyed his portrait and died. But fate is rarely that simple, and death for Dorian Gray, was but a momentary pause. Trapped in his own hell, it was only a matter of time until he returned to the realm of the living.

Which is where the third series of ‘The Confessions…’ begins, with Dorian’s rather grizzly resurrection in the gruesome and thoroughly absorbing opening chapter, ‘Blank Canvas’ , a traditional Haunted House story that’s given a strangely unconventional twenty first century makeover. It’s a story that sets the pace for the rest of the series, that begins at a gallop and slowly gains momentum until it thunders toward it’s gripping, rewarding finale that ends with the kind of cliff-hanger that leaves you begging for more, dying (not literally, obviously) to know the answer to that final question, the one that stubbornly remains, for the present, unanswered. Along the way, Dorian finds himself running into old friends and faces from the past, encounters ghosts and cursed artefacts, monsters from history, the undead, clandestine organisations, demonic forces in dream dimensions, is hunted by a rather unusual stalker before finally being forced to confront and battle his ultimate foe. It’s heady stuff, involving, intoxicating and exciting and it doesn’t let up for a single moment, continually throwing it’s titular anti-hero into harm’s way as he stumbles from personal crisis to personal crisis.

The series change of format, from largely narrated based tales featuring guest performers, to fully fledged dramas works and gives this series an edge that both of the previous entries lacked. It makes it more immediate, drawing its audience in through a mixture of wonderful players (Alexander Vlahos and Bernard Holley are particularly sublime in their roles as Dorian Gray. Yes, they both play Gray. Yes, I know it’s confusing. No, it won’t be when you listen to the series. Trust me) and writers that breathe enthralling life into each and every chapter of the play. It’s a new dawn and a new day for Dorian, and long may it continue to be so… Tim Mass Movement