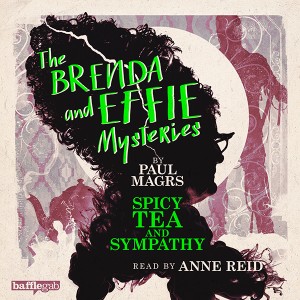 The Brenda & Effie Mysteries: Spicy Tea and Sympathy – Performed by Anne Reid, Dan Starkey & Stephen Critchlow & Written by Paul Magrs – Download (Bafflegab)
There’s something about Whitby. Something that lingers just beneath its surface. Something strange, yet at the same time enticing, mysterious, haunting but also oddly exciting and curiously appealing. And no, it’s not just Dracula – the thing that draws legions of goths to its sea swept shores – it’s something much older; something that flows through its streets that you can’t readily identify but know it’s there nonetheless. And if you’ve spent any time in the town, you’ll know exactly what I mean. Bram Stoker knew it, Paul Magrs knows it, and Whitby’s world, famous self-appointed, supernatural detectives Brenda and Effie know it too. Which is why, when a dashing proprietor opens a mysterious new tea shop and massage parlour offering all kinds of exotic variations of the quintessential beverage, Brenda and Effie make it their business to “investigate” it as soon as its doors open. That and the fact that nothing escapes the attention (especially if there’s a cup of tea involved) of ladies of a certain age who deem it necessary to know everything that happens in their locale.

And it’s their love of tea (and tea shops) and age related desire for knowledge that casts Brenda and Effie into the lion’s den and leaves them at the mercy of an ancient, insane creature whose desperate quest for immortality has led to her crossing paths with Brenda in the past. It’s a tale of mummies, resurrection, family vengeance, mystical teas, ancient magic, incantations and curses and a vile plot to take over the world in which Brenda’s history returns to haunt her, forcing her to remember who she once was and confront a monster she thought was long since defeated.

‘Spicy Tea and Sympathy’ is another glorious mish-mash of all of the best elements of Sunday evening television; the classic output of Hammer and Universal studios and weird pulp tales from the twenties and thirties. It’s gentle, sly and knowing humour will find a place a place in the hearts of anyone raised on Carry On films and the halcyon days of black and white horror cinema and creature features. Anne Reid, is as ever, sublime in the roles of Brenda and Effie (and numerous other roles), and the supporting cast of Dan Starkey and Stephen Critchlow help kick things up a notch or two (their portrayal of the nineteen thirties academics with peculiar side-lines in fantastic fiction and occult investigation will raise a heartfelt smile and a chuckle or five with anyone familiar with the lives of CS Lewis and Tolkien and a fondness for The Scarifyers) in this wonderfully funny, engaging and entertaining tale. Brenda and Effie’s adventures just keep getting better and better… Tim Mass Movement