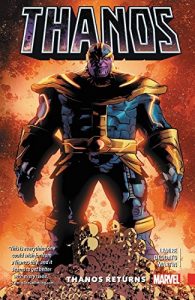 It’s never easy for a son to emerge from his father’s shadow and live up to parental expectation, but as far as the Universe is, and all of its inhabitants are, concerned when your Pop is the Mad Titan, it’d be a happy day if you settled down in some galactic backwater and just ignored the whole ‘make you old dad proud’ thing. Or alternately, if you came up with a way to finally erase him from existence; then every single living thing on most of the planets in creation would raise a glass to you and celebrate your name. Well, the ones that Thanos hadn’t already killed would.  The latter of which is what Thane, the last remaining son of the Titan who would be a God, attempts to do with a little help from his “friends” and Death herself.  Fickle with her attentions, Death has switched her allegiance from the father to the son, and in doing so ensured that Thanos will eventually feel the embrace that he has granted so many others, that of the grave. Terminally ill and rampaging throughout the cosmos in futile and desperate attempt to find a cure, Thanos is like a caged lion, weakened by his predicament but all the more unpredictable because of it. And that is when Thane choses to strike. As Thanos lashes out at everyone who cannot, and will not, help him, his son moves in for the kill and in the closing moments of Thanos Returns, Thane finally outgrows, and removes the shackles imposed on him by, his father.

Thanos Returns is a brutal, explosive and lightning quick story that reinforces the wisdom of the old wives’ tale that the apple doesn’t fall far from the tree. While not as cruel or merciless as his father, in Jeff Lemire’s thoughtful, and incredibly violent exploration of the relationship between offspring and parent, Thane’s lust for power and the lengths he’s willing to go to in order to achieve it, places an incredibly large x in the box marked ‘Like Father, Like Son’. Uncompromising and savage, it’s almost as if Lemire had in some weird, held behind closed doors séance contacted the spirt of Alfred Bester and asked it to guide him in writing a space opera infused with Shakespearian tragedy, while Mike Deodato’s retro, end of the seventies flavoured art, adds extra credence to the classic feel of the energetic, snappy narrative that refuses to hold back or pull its punches.  All men must die and all gods fall, and in Thanos Returns the end slowly, but surely begins to catch-up with the being who devoted his life to the worship of Death. Gather round, for the end is nigh… Tim Cundle