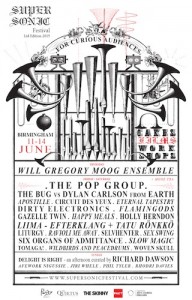 With the weekend of Supersonic Festival 2015 drawing ever nearer, there’s yet more tantalising activities and opportunities to share,
and today, we can welcome in the following…

All Ears, an exhibition, curated by Supersonic Festival, that has its basis in the music boxes that can be found in Birmingham Museum’s rarely-seen collection of artifacts and instruments. These fascinating and charmingly archaic music boxes will be on display during All Ears, where artists including Owl Project, Sarah Angliss, Morton Underwood and Paul Gittens have also created new works in response to the innovation of early technology and programmable music machines. Attendees will be able to marvel at ever-shifting, self-generating sound sculptures, revamped pipe organs, listening devices and other primitive gadgetry of the musical kind from the distant past and the imminent future, all in one eccentric exhibition. All Ears runs from the 1st-14th of June at Millenium Point, and admission is free throughout.

On Friday 12 June, Supersonic in partnership with Many & Varied will host Bees In A Tin, a day of presentations and demonstrations by artists whose work crosses between the arts, science, technology, and games. Knowledge will be imparted from the sound philosophers Robert Curgenven and Duncan Speakman, as well as Farmers Glitch, Owl Project and many more exciting thinkers and tinkerers who are out to challenge and champion their fringe fields of interest and areas of expertise.

One of the most exciting prospects for the festival and the wider community of Birmingham is the arrival of the internationally renowned Moog Sound Lab, which will be housed at Birmingham City University’s Parkside campus for four weeks, with artists in residence invited to explore, experiment and compose on these iconic and revered instruments. Gazelle Twin (the twisted Cronenberg-inspired persona of producer, composer and artist, Elizabeth Bernholz – who is also performing a set at Supersonic Festival), Sarah Angliss (an award winning composer, roboticist and historian of sound) and Free School (Birmingham retro-futurist, mask-donning disco duo, exploring a unique fusion of Electro, House, Balearic and Kosmiche), as well as a number of academics and students from Birmingham City University, will immerse themselves in the Moog Soundlab, and we eagerly await their results which shall be revealed over time, even after the festival has commenced.

Here’s a quick recap of last week’s extra curricular activities which were announced – The Memory Band’s British Library Commission, Children Of The Stones, John Doran’s reading from his debut book Jolly Lad, Ben Chasny’s workshop explaining his Hexadic System, a talk with Rob Chapman about his new book Psychedelia and Other Colours and as an extension of the Digbeth Delights exhibition at art space Centrala, there will be a panel discussion with Gee Vaucher (known for her iconic imagery with the punk band Crass), Nic Bullen and artist Oskar Kasperek, chaired by John Robb to talk about outsider art and music.

Full info on all of the above extra curricular activities as well as full details of the musical line up can be found on the Supersonic website. Meanwhile here’s a reminder of the musical performances one can expect from Supersonic Festival 2015…

Tickets can also be bought at the Supersonic website, with weekend tickets priced at £60, and newly released day tickets as follows: Thursday £15, Friday £27.50, Saturday £37.50. Richard Dawson’s Delight is Right is limited capacity and only available to those with 3 day passes, Digbeth Delight is a free afternoon of avant-garde performances, workshops and talks located in artist-led spaces based in the area.