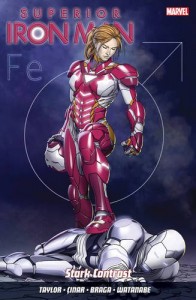 Superior Iron-Man: Stark Contrast – Tom Taylor, Dennis O’Neil, Laura Braga, Yildiray Cinar, Felipe Watanabe & Luke McDonnell (Marvel / Panini)
It’s often been said that man’s (and indeed woman’s) worst enemy is himself (or herself), and there is a grand literary tradition of deeply flawed, but incredibly charismatic, heroes battling inconceivable odds and emerging victorious only to later fall victim to, and be defeated by, their own demons. While Marvel has had more than its fair share of imperfect heroes, none have taken to the broken mantle or worn the crown of thorns in quite in the same manner as Tony Stark. He is, arguably, one of the greatest superheroes and most complex characters to have ever emerged from the four colour universe, and for the last four decades his soul has been in turmoil, as the war between his hedonistic and intellectual sides has been fought on every major global, and universal, stage. Somehow though, he has always prevailed and has always managed to keep his monsters in check, locking them away before they completely subsume him. Until, that was, the Axis event flipped his personality upside down, bringing the darkness to the surface, allowing it to flourish, creating something new. A man concerned with only his own pleasure and profit, a man for who morality meant, and means, nothing, a man driven only by vanity, ego, arrogance and his own selfish desires. The Superior Iron-Man.

‘Stark Contrast’, finds Tony finally crossing a line his old self would never have dreamed of: selling the most destructive weapon he ever devised to multiple world governments in order to fund his need to control (and buy) the media in an attempt to carefully regulate and govern his public image. Which brings him into direct conflict with Pepper Potts and Resilient, who gambles everything in a desperate last bid attempt to “cure” Stark and bring the old Tony back with the help of an old Iron-Man back up plan. It’s a supreme slobber-knocker, a knock down, knuckle pounding conflict in which reason and muscle share equal billing as the old Tony and new Stark fight to the “death” for control of Iron-Man’s life. And, if I’m honest, it’s outcome is more than a little shocking and it’s going to send shock-waves spiralling through not only this book, but I’d imagine the whole Marvel U for some time to come. It’s outcome is even more unsettling when paired with Denny O’Neill’s classic ‘Deliverance’ (which is also included in this tome) in which Tony having hit rock bottom begins his painful journey back to sobriety and a semblance of ‘normality’, as we always expect heroes to come good in the end, and when they don’t, it helps enforce and illustrate just how fragile a creature, even one who has battled gods and saved all of creation, man really is. And how in the end, wealth, power and fame aren’t the things that define us as people, our actions, the things that we say and do, they’re the things that we’ll remembered for. They’re the things that define us. This is the lesson that Tony ultimately learns in one of the most powerful final pages, and moving final panels I’ve ever read. The art is exquisite, the story exciting, emotive and packed full of more twists and turns than the fastest of rollercoasters and the ending will knock the wind right out of your sails. What more could you possibly want, or even need? It’s got everything… Tim Mass Movement