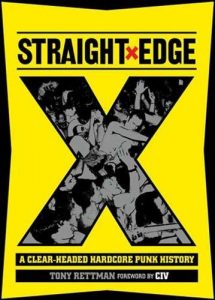 First things first, I’m not Straight Edge. Never have been and almost certainly never will be. But, for the last three decades I’ve had an ongoing love affair (in purely musical sense of course) with Straight Edge Hardcore.  I remember as though it were yesterday, wandering into Roxene Records   and while flicking through the import rack, I found an album by a band, Youth of Today, that I’d read a live review of in Metal Forces. At eleven pounds the record, Break Down the Walls, was kind of expensive at the time and was on a label that I’d never heard of (Wishing Well Records), but the sheer intensity of the live photograph that adorned the cover convinced me that I had to have to have that record. It was the best eleven quid that I’ve ever spent.

There isn’t a week that goes by when I don’t play that record – well not that original LP as that’s long since gone and has replaced by multiple copies on CD, as it’s still part of my staple musical diet and I still get the same shivers of electricity coursing through every atom and fibre of my being when the band kick straight in to Make A Change. And while, like I said, I’m not an edger and can’t relate to everything that Cappo sang about (being slightly more nihilistic, misanthropic and pessimistic than most folks, I tend to agree with, and find affirmation in, Paul Bearer and John Brannon’s world view), the energy, power, emotion and incredibly catchy songs made me an instant convert and from that point on, without subscribing to the philosophy, even though elements of it have since crept in to my life, I started to chase down and find as many records, and go to as many shows, by xSxEx bands as I could.  I may not be Straight Edge, but its soundtrack has been, and is, close to my heart, so when Tony Rettman’s latest book Straight Edge: A Clear-Headed Hardcore History arrived; I literally dropped everything else that I was doing and dived straight in. And boy oh boy, am I glad that I did.

Straight Edge… is the story of the movement and musical sub-genre of Hardcore’s beginning, history and evolution told by the people who started it, fostered and embraced it and through dedication, devotion, force of will, faith and a belief that they could make the scene and the world a better place through carrying the message as far as they could and taking the music to as many people as possible made it a truly global phenomenon. From its founding, and often floundering moments, in Washington DC, Boston, Reno and later New York and Connecticut in the eighties, through its darkest and often dangerous days in the nineties and resurgence in the twenty first century, Tony Rettman’s book tells the story of a scene and the bands and people who invested their hearts, souls, minds and lives in Straight Edge.

Intriguing, compelling and absorbing, Straight Edge is a story of disparate voices, who while united by a commonality of ideas and principles often viewed things incredibly differently, but somehow despite their differences, managed to create something that’s still a vital and driving musical force and lifestyle choice nearly four decades after it made its initial presence felt. Rettman doesn’t gloss over the skeleton’s in  xSxEx’s closet either, and ensures that the book takes the time to explore the more dubious aspects of the scene, namely Hardline and it’s often repugnant approach that while being attractive to a minority, alienated the majority. The author doesn’t try and force his own voice or opinions on the reader and instead lets the people who were, and are, at the forefront of every aspect of the xSxEx scene tell it’s story in their own words, mind blowing live pictures that make you wish you’d been at the shows where they were taken, flyers and more that capture every aspect of Straight Edge’s sometimes turbulent but always exciting history.  It’s all too easy to throw terms like definitive, crucial and indispensable around, but Straight Edge: A Clear-Headed Punk History is all of those things, as it’s the fundamental and encompassing story of xSxEx. Absolutely essential… Tim Cundle