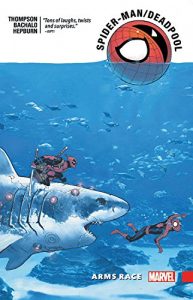 Wade Wilson, much like his namesake Brian and the rest of the Beach Boys, really gets around. No sooner has he emerged (relatively) unscathed from his hoo-ha with Old Man Logan, than he’s getting all tangled up with his old buddy Spider-Man again. Deadpool being Deadpool, and being persona non grata with, well just about every right minded person everywhere, recruits a bunch of like-minded folks*, “appropriates” a SHIELD Heli-Carrier and sets up a new business venture that flips the bird at legality and involves all manner of fantastic and incredible weaponry.  But even though he’s fully committed to the criminal life, even Deadpool isn’t crazy enough to advertise his wares on late night television, so when someone who looks and sounds exactly like him starts doing exactly that, forcing Spidey to come knocking at his new SHIELD built and paid for door, Wade smells a set up. And so does Pete, which leads to them reluctantly pairing up to find out who’s trying to frame Wade and why.

While most folks will tell you that time is a great healer, circumstance can also drive people apart and with Wade now being a wanted for murder globally, Spidey finds himself having even less in common with his erstwhile chum in insane shenanigans. However, being a stickler for right and wrong, he agrees to help Wade, a decision that he soon comes to rue if not regret, as it leads him back into Deadpool’s screwball Universe, catapults him into Tabula Rasa** and leads him into all manner of serious double and triple crosses and who knows how many other varities of betrayal and treachery. And his decision brings them face-to-face with an old foe and his wonderfully inventive scheme that could completely change the world according Wade and Pete, and every other caped crusader, righter of wrongs and hero type.

It’s nice to know that the more things change, the more some things still stay the same. Spider-Man/ Deadpool is one of those things, a constant you can depend on.  And while Robbie Thompson weaves the kind of story that you’ll want to read at least a couple of times to make sure that you didn’t miss anything, he also holds on to the things that make this team-up so entertaining, it’s sense of humour and fun and the idea that nothing is too weird for Spidey and Wade; and things do get weird. Really, really weird. Smart, funny and carefully and cleverly plotted, Arms Race also looks fantastic thanks to the eye candy art of Bachalo and Hepburn and their partners in comic crime Marcus To and Matt Horak. With more twists and turns than a Coney Island Rollercoaster marathon, Arms Race proves that there’s a whole lot of life left in one of the oddest partnerships in the Marvel Universe.  All together now, Spidey and Deadpool sitting in a tree, F-I-G-H-T-I-N-G… Tim Cundle

**If you don’t know what it is, use the googles and look it up. It’s worth it. Go on, do it. Do the googles thing.