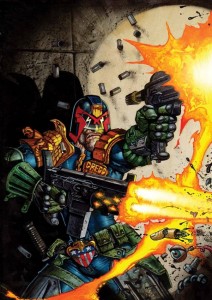 2000 AD is bidding UK comics retailers a merry Christmas this year as superstar artist Simon Bisley returns to the comic that launched his career with a special cover.

The legendary weekly anthology has teamed up with Diamond UK to offer comic stores an exclusive retailer variant cover by Bisley, who blazed onto the comics scene with ABC Warriors: The Black Hole and the seminal Sláine: The Horned God in the 1980s, as well as being the artist on the wildly popular Batman/Judge Dredd crossover, Judgement on Gotham.

The variant cover for the bumper end-of-year issue of 2000 AD, showing Bisley’s trademark tough-guy Dredd firing away in the line of duty, will be available exclusively from Diamond UK and will be out in time for Christmas.

2000 AD Prog 1961 will be a 100-page extravaganza with work by Dan Abnett, Rob Williams, Pat Mills, Richard Elson, and many more. This issue will go on sale in print and digital on 16 December.

This issue also includes the return of veteran Spanish artist Jesus Redondo on a new Future Shock strip by Martin Feekins, as well as the winning partnership of Rob Williams and Henry Flint, whose Judge Dredd: Enceladus storyline was a major hit with readers earlier this year.

The standard cover for Prog 1961 will be revealed later in November.