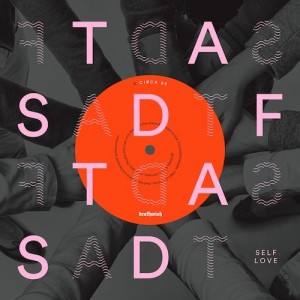 Self Defense Family are one of today’s most prolific Punk bands. Through countless releases and many musical contributors (they have had more than ten active members at any given time), their collective has grown in both sound and vision. Next Tuesday, the band will release two 7inch EP’s – one, a split with Creative Adult and the other, a collaborative release with Deathwish label mates Touche Amore – and the latter EP, titled Self Love, is streaming now in its entirety via VICE. Listen here.

Self Love was created by 15 musicians working together as one band, all eventually captured by engineer Will Yip (Blacklisted, Title Fight) at Studio 4 in Conshohocken, New Jersey. A-Side “Circa 95” is an upbeat combination of Touche Amore’s explosive emotional leanings and Self Defense Family’s trademark cynicism. As the song twist and turns, it peels and curls to reveal layers of guitars and dueling percussion. All while lyrically paying subtle homage to hardcore legends Unbroken. While B-Side “Low Beams” begins with a contagious jangle before erupting into an catchy sonic finale. Telling the story of nomadic displacement; the highs, lows, and in between that many who travel the open road experience.

Also to be released on March 10th, via partnership with Deathwish Inc. and Run For Cover Records, Self Defense Family and California’s Creative Adult have penned a two-song split 7inch. This album features the new SDF song “Somertron”, which is an experimental tangle of swirling guitar melody while vocalist Patrick Kindlon’s unmistakable storytelling swells into a beautiful, fracturing crescendo. Creative Adult goes on to explore noisy, sometimes psychedelic sounds with an undeniable Dischord-styled edge and their song, “Americans”, meanders and builds as if were an ’85-era Punk anthem.