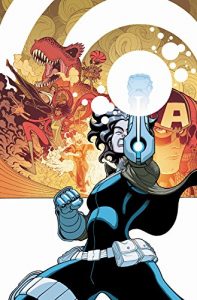 Okay, I admit it. I’m a series of Agents of S.H.I.E.L.D. behind. I don’t know how it happened, it just did. One minute I was watching the opening episode and series linking it and the next I’m looking at twenty something episodes lined up and ready to go on the old digital doodah box while desperately trying to find the time to binge, or at least begin to, watch them all.  So I have no idea how Daisy’s (or Quake as she’s also known) character has developed in the televisual world, but I know, thanks to Secret Warriors, exactly how she’s evolving in its four colour counterpart, and to be honest I’m not all that enamoured by her. That’s mostly, I’m assuming, by design on Matthew Rosenberg’s part and the rest is down to the circumstances she’s been caught up in as Secret Empire begins. She’s been transformed her into a vengeance obsessed loner willing to put anyone and everyone else at risk in order to get her hands around the throat, and slowly crush the life out, of Captain America.  Don’t get me wrong, the character is superbly written, it’s just that I never figured she’d go Frank Castle on steroids dark, which she does in Secret Empire. Still, I can’t deny that she adds more than a little oomph to the team dynamic, so I guess it’s just me being a little weird.

Daisy, it turns out, thanks to a mission she was involved in that ended badly for her and even worse for the rest of her team, manged to escape the whole mind control thing that brought the rest of S.H.I.E.L.D. to its knees and then went on the run and avoided being capture mostly by beating the hell out of anyone sent to bring her in. But no-one is an island, and thanks to fate, being on the same side and fighting the same fight, Daisy finds herself in a sort of loose confederation with Moon Girl, Devil Dinosaur, Inferno and Karnak in order to take the war to Hydra and find a missing piece of the puzzle that could help bring Steve Rogers new world order crashing down. Their search brings them into conflict with the X-Men and Daisy’s father and eventually leads them to New Atillan and propels them to the forefront of the biggest prison break that Hydra has ever seen.

Yeah, so while I’m not the biggest fan of the way that Daisy is being dragged to the dark side, a journey that I’m starting to think that (like Luke Skywalker) may well be due to father, the relationships that are slowly developing, and the inevitable in-fighting, between the members of the Secret Warriors are enough to make me want to stick around to find out what happens next. I mean, come on, who doesn’t love Moon Girl and Devil Dinosaur? Anything involving that pair of heroic scamps should be enough to make you lay your cash down and invest your time in Secret Warriors. But the fact that it’s also a pretty darn good story filled with intriguing character development and eye popping artwork might also tempt you to add it your pull list.  All they need is some sort of punchy tag-line that acts as a call-to-arms and they might just be able to start giving the Avengers a run for their money… Tim Cundle