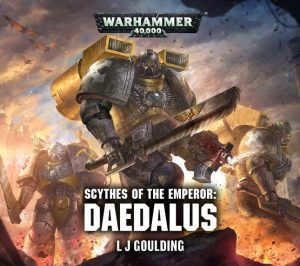 In much the same way Gav Thorpe is synonymous with the Dark Angels and James Swallow is to the Blood Angels, Laurie Goulding is slowly distinguishing himself as the voice of the Scythes of the Emperor. This audio book sits along the same timeline of events as Goulding’s previous stories Orphans Of The Kraken and Slaughter At Giants Coffin and there are some tasty little plot threads and characters that connect the stories together to the larger 40K universe very subtly.

Daedalus finds us in the company of the last remaining survivors of the Scythes of the Emperor, operating at diminished capacity and pitifully few in number following on from the Slaughter At Giants Coffin. When a metric fuck ton of Tyranids show up to devour a world that happens to be storing some of the Scythes gene seed, the shattered remains of the chapter find themselves tasked with retrieving the genetic material in order to replenish their numbers. But at what cost? It’s the standard set up of a few good men (sic) versus seemingly insurmountable odds with some interesting lore twists.

It’s been a while since I’ve dug into Black Library’s audiobook output and I am pleased to report that standards have improved drastically. My Previous experiences had been marred somewhat by actors adopting accents that were verging on Carry On style racial stereotyping and cheesy audio special effects. Thankfully none of that is present in Daedulus, which posesses a quality that feels more like a BBC radio drama than a simple audio book. Maybe it is the exceptional voice acting and accomplished cast, the audio effects that are a welcome embellishment rather than a distracting irritation and a decent musical score that feels in keeping with the heroic tone of the WH40K universe. There are some really intense action scenes in this tale that are pushed toward dramatic extremes with the use of clever sound design. Feelings of claustrophobia and panic are magnified and the whole experience feels a lot more tangible and visceral as a result.

The story follows Assault Squad Cassander on their mission to snatch back the gene seed and avoid getting swallowed up by the Tyranid swarms of Hive Fleet Kraken. Brother Esau is the main protagonist here, a marine who’s still green around the gills. It felt like a nod to the classic movie Aliens when Esau confesses to one of the new members of his squad that it’s his first combat drop outside of simulation! Thankfully Esau is a far more likable prospect than the inept Lieutenant Gorman and at no point did I find myself praying for Esau to swallow a hand grenade. Quite the opposite in fact. Esau is so well written as a character, that much like Garro or Loken in the Horus Heresy books I found that I became quite invested in him.

It’s always difficult to lend character to villains like the Tyranids, a hive mind that’s sole instinct is driven by a thirst to consume. There’s very little room for character development with baddies like that but Golding succeeds in portraying the ferocious alien threat as a tide of destruction that simply will not relent. Golding’s approach to the Tyranid’s makes the Astarte’s seem more human and vulnerable in comparison, which in turn helps the reader to engage with them as individuals, their plight all the more perilous.

I spent a very pleasant hour sitting on my posterior in the back garden listening to this story and it left me hungry for more tales of a legion I’d always regarded as the Ultramarines second eleven. Outstanding. Nathan Bean