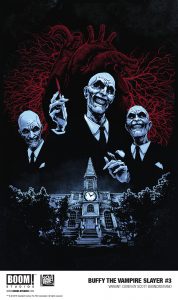 The reimagining of Joss Whedon’s groundbreaking series reaches the penultimate chapter of the first arc as Buffy and the Scooby Gang (the name was Xander’s idea, he’s workshopping it, it probably won’t stick) delve deeper into the heart of Sunnydale’s underbelly—and make a shocking discovery about the true nature of the Hellmouth. Meanwhile, Drusilla – AKA THE MISTRESS – sets her sights on Cordelia, as Cordy and Spike find accidental common ground.

Buffy The Vampire Slayer premiered on the WB Network on March 10th, 1997. The Emmy and Golden Globe-nominated series, which ran for seven seasons from 1997-2003, stars Sarah Michelle Gellar as “Buffy Summers.” Chosen to battle vampires, demons and other forces of darkness, Buffy is aided by a Watcher who guides and teaches her as she surrounds herself with a circle of friends called the “Scooby Gang.”

“Some episodes of Buffy make you sad or happy or excited or maybe even terrified. But ‘Hush’ made you feel all of them at the same time and it’s one of the reasons it remains a high watermark for storytelling,” said Jeanine Schaefer, Executive Editor, BOOM! Studios. “Scott Buoncristiano’s cover conjures up that emotional stake to the heart perfectly on this cover, as we continue our tribute the best episodes of Buffy.”

Print copies of BUFFY THE VAMPIRE SLAYER #3 will be available for sale on March 13th, 2019 exclusively at local comic book shops (use comicshoplocator.com to find the nearest one) or at the BOOM! Studios webstore. Digital copies can be purchased from content providers, including comiXology, iBooks, Google Play, and the BOOM! Studios app.