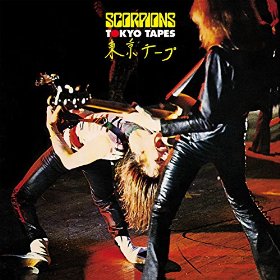 Originally released in 1978 as a double gatefold vinyl (I still have my copy safe and in mint condition might I add) it was a classic two-disc live album set capturing the Germans during their Japanese tour of that same year. Boasting early favourites ‘In Trance’, ‘He’s a Woman – She’s A Man’, ‘Steamrock Fever’ and ‘Fly To The Rainbow’ this was an era before any commercial entities were to creep in. Sadly it was to be guitarist Uli Jon Roth’s last performances with the band, and it seems a fitting way to end an era – the band were at their peak and the musicianship alongside the songs themselves was outstanding. Fantastic audience participation as well as added extras along the way demonstrates how the band were on fire. As well as the original seventeen songs on the first pressing, we are treated to an extra eight live bonus tracks, two of which should have been included initially, apparently… ‘Robot Man’ and ‘Hellcat’ add a nice little extra. The re-mastered version loses none of the original charms of the vinyl showing this album should really be ranked alongside those ‘greatest live records of all time’. Mark Freebase