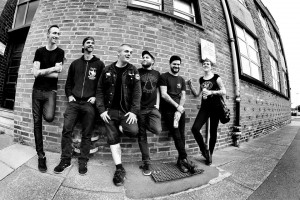 Following another exhaustive three week European tour that’s capped off a hectic year on the road in support of their latest album ‘Out Of Anger’, Warrington folk-punks Roughneck Riot have released a brand new video for album track ‘All That We Know’

Made up of footage from their extremely busy 2015, it’s a glimpse into life on the road for a DIY punk band whose relentless dedication to touring this year saw them burn through their beloved van across several thousand road miles, only for them to successfully crowd-fund a new one via Kickstarter and get back out on the asphalt in time for Christmas.

“This song is about giving everything you have to something only for things to not go the way you’d hoped” says front man Matty Humphries “and then starting over and figuring it all out again instead of giving up.”

Never ones to rest on their laurels, the band have two final gigs left this year before taking a three month break from live performances to start writing album number four. Their first gig back in 2016 will be their ‘Annual Birthday Bash’ at The Pyramid Centre in Warrington on 26th March – more info here.

Following that the band will be relentlessly hitting the road again throughout 2016 with a string of EU dates already booked to be announced in the near future. Now more than ever, the relevance of their politically astute punk polemic is unquestionable – Roughneck Riot are that rarest of beasts, a band using their voice to say something with substance.

Drawing influence from a host of folk, punk and hardcore bands including The Levellers, The Clash, Social Distortion and Against Me!, they’re intent on doing their bit to highlight socio-political issues of the 21st Century to a brand new generation of punks.