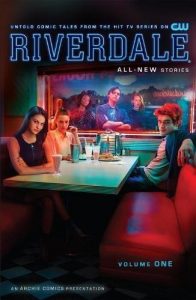 From Roberto Aguirre-Sacasa and the writers of the CW TV series Riverdale, the story begins in the weeks leading up to the first episode.  It takes us through Archie’s summer of work and illicit romance, Betty’s internship living away from home, Veronica’s life before her father’s prison sentence for fraud and extortion while Jughead, working at the movie theatre, waits for inspiration to strike him with enough force to put pen to paper. The inspiration comes in the form of the missing Jason Blossom, who at this point is presumed dead from drowning.

This story contains some pretty dark stuff for a graphic novel, inspired by a TV series, inspired by a comic about “The town with pep” and its wholesome young residents… which is precisely what Roberto Aguirre-Sacasa intended, citing inspiration from Twin Peaks and movies such as Stand By Me, Donnie Darko and Rivers Edge. The discovery of Jason Blossoms dead body acts as the catalyst through which the main characters explore their own relationships and values and those of their peers, parents and other Riverdale inhabitants. Hellish team initiations, bereavement and loss of stability provide an intense background to everyday coming of age stuff.

The accounts within the volume are intended to reveal the untold stories between the TV episodes. While some were easy to plot against the timeline of the series and added new aspects to the ‘seen’ story of the TV Riverdale, others just didn’t seem to bond quite so completely. Though perfectly good as tales in their own right, they appeared to stand alone outside of the main body of the storyline and didn’t add anything extra to what we as viewers and readers already knew. That being said, the way the chapters are written ensured that I retained an interest in this trade paperback to the end.

I’ll hold my hands up and admit the last time I read anything even vaguely resembling a comic was Bunty circa 1978. My only knowledge of Riverdale is from binge watching all of the TV episodes available to me. As a (grown up) graphic novel virgin, I’m not sure if its normal to have so many people involved in collaborating on a collection of this type and was interested to read that the writers developed the storylines in much the same way as they would a TV show, a co-operative process with one writer pitching an idea and the others assisting in developing the storyline. This could well be why it moved effortlessly from one chapter to the next.

Likewise, although a number of artists contributed, at no point did the visual spectacle feel disjointed. Using different artists to bring each of the main player’s summer experiences to life, worked well. The styles complemented each other beautifully and the characters, though rendered slightly differently by each illustrator, maintained the visual traits and attributes which made then unmistakable, my personal favourites being Alitha Martinez melancholic representation of Jughead with Joe Eisma really capturing the dark brooding undertones I felt watching the TV series.

The volume has some great special features including a cover gallery, information about the evolution of Archie and the other characters over 75 years and a bonus issue of the new Archie comic.  If I’m honest, I didn’t expect the graphic novel to have the same ‘need to binge’ effect on me as the TV show, but here I am, writing this review after glutting myself on the first season of Riverdale and waiting for the next course… preferably with a side order of strawberry milkshake from Pop’s and more than a small dollop of dead people.  Paula Harris