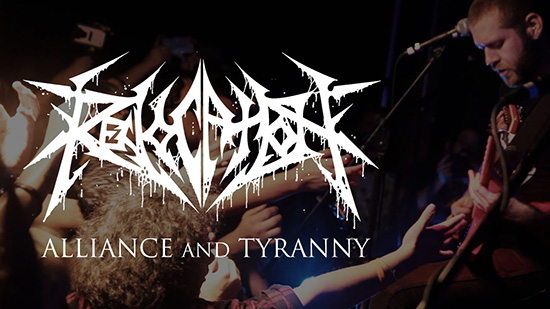 New lyric video for “The Fix” out now!

On November 13th, REVOCATION will release the long awaited re-issue of their debut album, ‘Empire of the Obscene’ (with 2006’s ‘Summon the Spawn’ demo!), which can be pre-ordered now at: metalblade.com/revocation. At the Los Angeles stop on their recent North American headlining tour, REVOCATION filmed their performance of the track ‘Alliance and Tyranny’ (found on ‘Empire of the Obscene’). To watch the live video, head over to DecibelMagazine.com

In addition to ‘Alliance and Tyranny’, the band has also completed work on a lyric video for the song ‘The Fix’ from their 2014 release, Deathless. Created by Nick Hipa (Wovenwar), ‘The Fix’ lyric video can be viewed here: metalblade.com/revocation

The newly re-mixed and re-mastered version of the song ‘Summon the Spawn’ can be streamed at: decibelmagazine.com

Founding member and frontman Dave Davidson on the re-release: “Back in 2008 we self released our debut record “Empire of The Obscene” only pressing 1,000 copies at the time, now thanks to the good folks at Metal Blade and the demand of our fans it will be available worldwide! We are very excited to finally give this record a proper release and can’t wait for everyone to hear the newly remixed and remastered tunes courtesy of Pete Rutcho. We’re also including the elusive “Summon The Spawn” demo from 2006 as well as newly revamped cover art to make this release extra special.”