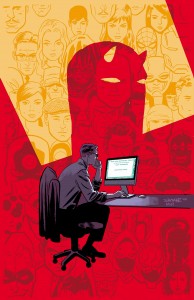 Experience the life and times of Matt Murdock as told by his Eisner-award winning creative team as well as a few guest creators in DAREDEVIL #15.1 – an oversized special featuring superstar talents Mark Waid, Chris Samnee, Marc Guggenheim and Peter Krause!

Matt Murdock, now publically revealed as the man behind the Daredevil mask, has begun working on his highly anticipated autobiography! As the Man Without Fear begins to dust off the cobwebs of his past adventures, who knows what untold stories might shake loose!

What happens when Daredevil catches a murderer while out on patrol, only to have to defend him in court the very next day? Marc Guggenheim (Amazing Spider-Man) and Peter Krause (Daredevil: Road Warrior) have the answer as Matt’s double life leads to some hard choices!

Then, Daredevil artist extraordinaire Chris Samnee writes and illustrates his first hornheaded tale as the Man Without Fear of yesteryear comes face to El Diablo! Prepare for a devil vs. devil throwdown the likes of which you’ve never seen before!

Rounding out this oversized issue is new material from the monthly Daredevil team of Waid and Samnee that will have fans on the edge of their seat! This April, relive the greatest untold stories of Hell’s Kitchen’s greatest guardian with DAREDEVIL #15.1!