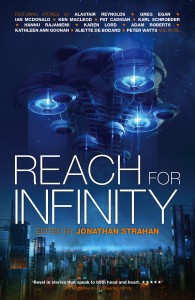 Reach For Infinity – Edited by Jonathan Strahan (Solaris Books)
What happens when humanity reaches out into the vastness of space? Multi award winning editor Jonathan Strahan brings us fourteen new tales of the future, from some of the finest science fiction writers in the field.

Strahan is one of the best Sci Fi editors around at the moment, and coupling him up with notable writers of similar esteem such as (a personal favourite) Alastair Reynolds gives ‘Reach for infinity’ some serious depth. This third in the series of sci fi stories is themed around the strength of the human spirit and the need to get off earth. All of the stories included are set during the next 100 years (roughly.) Not as serious and hard hitting set, as its predecessors, rather something to pick up for a quick blast of aliens. I am not the world’s biggest sci fi fan, with even some of the most highly regarded works in the genre can be a bit hit or miss for me, but this one was very enjoyable and not too taxing. Gav