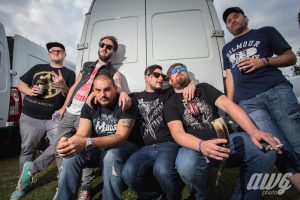 After a 6 year hiatus, flag bearers for the British metal scene, RAGING SPEEDHORN have returned with new members, a new outlook, a new album “Ritual” and plenty of unfinished business to take care of. Fresh from a successful tour of the U.K this summer and prior to an appearance at this year’s Download Festival, Mass Movement caught up with bass player Dave Thompson to talk about all things Speedhorn.

MM: Have you guys been influenced by anything new on this record, or do the same sounds/issues still spur you on?

DT: We all have many different influences that we throw into the pot to create the Speedhorn sound. We like to try lots of different ideas out along the way. But the main Speedhorn sound stays, fresher and angrier.

MM: I read recently that your 3rd ever show was with U.K sludge legends Iron Monkey. Were they a big influence on your formative years?

DT: For the other guys I believe it was. They played with Monkey a few times. They did have an influence to the band but mostly for their attitude. Of course there are comparisons to the sound of Monkey and Speedhorn. Great band!

MM: It’s well known that you were fairly disgruntled with your hometown of Corby, in the early days. Is that still the case and do any of you live there now?

DT: A few are still in Corby and have families and whatnot. Corby’s not so bad now though, but like any band coming out of a small town, you are pissed off and want to get out. Home will always be home.

MM: As a sludge band coming out of Corby, do you feel that you exceeded your expectations for the band, first time around?

DT: No one ever thought the band would take off as it did. The metal/hardcore scene was crying out for a band like Speedhorn. The “fuck you” attitude and loud as fuck gigs were very needed.

MM: This is your first recording since welcoming back original vocalist Frank Regan. How did that come about?

DT: We spoke for a long time about getting together to do some shows and decided the time was right. We wanted to do it with Frank and John being back at the front causing chaos. It all just went from doing the shows to writing some songs and seeing where it went.

MM: This is also your first recording with new guitarist Jim Palmer (formerly of Charger). How did he fit into the writing process for this album?

DT: We all knew Jim from the Charger/Murder One days. When we asked him to join we knew that he would fit in great and have the same mindset as us. Jim contributed a lot of songs & ideas to the record.

MM: You have a track on the new album called “Motorhead”. Was this meant as a Lemmy tribute, are you all Motorhead fans?

DT: The song Motörhead came about first as an idea that Frank had. It then became an unofficial tribute to Lemmy in a way. We all are fans of Motörhead, so it became very fitting to do this. It has the Motörhead vibe!!

MM-Did you ever get to meet the man himself?

DT: I did not myself, but I know a few of the other guys did.

MM: During your hiatus, some of you took other roles within the music industry, did this have an influence on how to make your comeback, and did it make you more business savvy?

DT: We have always been DIY when it comes to running the band. A few of us worked within the industry and still do. We knew how we wanted to do Speedhorn this time and we wanted to be in charge of our own destiny.

MM: This album was made possible by fans making Pledge donations. Do you think this could be the future for the music business?

DT: The music business is fucked at the moment. This is definitely the future for bands. Without your fans a band really struggles. We wanted the fans to be as much a part of the record as we were.

MM: Your second and most successful album, “We Will Be Dead Tomorrow”, was produced by Billy Graziadei and Danny Schuler of Biohazard. The new album is produced by Russ Russell (Napalm Death, Dimmu Borgir). What attracted to you to working with Russ this time around?

DT: We have all known Russ for many years from working with him on different projects. He was our first choice for the job. So at Bloodstock we entered into drunken discussions to make it happen laughs. And the rest is history!

MM: You are also playing the Download Festival this year. If you could have your own dream “Speedhorn Fest” what 5 bands past or present would be on it?

MM: You’ve toured with some pretty big names (Slipknot, Rammstein). I love a good tour story, and you must have picked some up on the way. So to end the interview, tell us your favourite!

DT: We have had many a story to tell laughs. It will all be available to see when we write the Speedhorn diaries laughs. Maybe another Pledge campaign for that!