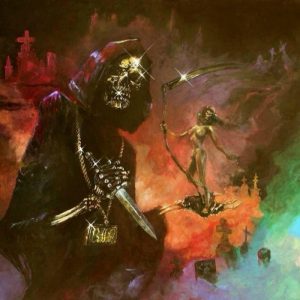 Dirty, gritty, and fuckin’ heavy – that’s how I’d describe In the Wind to trusted friends and colleagues. Fast paced doom metal in which the presence of Motorhead, Sabbath, and Bathory make themselves and become immediately apparent the moment instrumental album opener The Scythe kicks in. However with an array of tempo changes, it seems R.I.P. waste no time in messing with their audience and just when you think their sound can be easily defined the band throw another curve ball into their mutilated cocktail. There is a common denominator though, and that revolves around their ability nail their patented death tinged, fuzzed up street rock fury. I don’t know why, but there seems to be something punk rock within their underlying tone, maybe it’s the simplistic honesty of the sound, or their collective influences manifesting themselves, but whatever it is, it doesn’t change the fact that R.I.P. are a band well worth checking out.  Mark Freebase