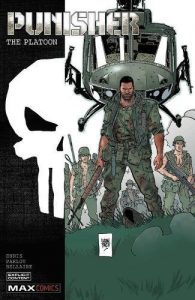 War is hell and the crucible upon which men are made and broken. Or so the wisdom of ages and infinitely clever philosophers would have us believe, and while there is merit in the first part of that statement, I’ve always thought that most people were forged by a lifetime of collective experience and not their participation in, as defining as they might seem to be, the horrors of conflict. But Frank Castle isn’t most people and in The Platoon Garth Ennis goes back to the battlefields on which the former Marine turned super-vigilante “hero” discovered who he really is.

Told from a third person perspective in which an author and journalist researching a new book quizzes surviving member of Frank’s unit from his first tour of duty of Vietnam in ’68, The Platoon is an uncompromising, incredibly intelligent and honest story of soldiers and the fortunes, and misfortunes, of war; all of which serves as a backdrop and the theatrical dressing for the beginning of the bullet riddled fable of the man destined to become the Punisher. Capturing the start of his journey through the blood soaked jungles of America’s unwinnable war from the perspective of his men and the Colonel who led the forces that opposed them, The Platoon is part character study and part intense thriller that plays as out as tale of men forced to become brothers by circumstance and a slow burn game of cat and mouse in the lead up to, and the aftermath of, the Tet offensive. And it offers the world its first glimpse at the Punisher and his pragmatic outlook and black and white take on his role, as he does whatever it takes to get the job done without hesitation. Just as he always has done and always will do.

By abandoning the modern take on the Punishers mythology and taking him back to his original roots, Garth Ennis allows Frank to be Frank again and in doing so, paints a portrait of a man who’s innate skill set and unique understanding of the job he’s been sent to do allows him to, later on in life, become the most feared vigilante the criminal underworld has ever known. By keeping Frank out of the spotlight and letting others recount his story, Ennis also adds to the mystery surrounding, and the enigma that is, the Punisher while at the same time, tells a riveting, if somewhat brutal and unflinching, war story. And thanks to Goran Parlov’s intricately detailed and expressive art, The Platoon doesn’t just blow you away on the narrative front; it slays you artistically as well. The saying “If looks could kill” could have been invented for this book as Ennis and Parlov draw their beads, take a joint deep breath and unleash Frank Castle on an unsuspecting world. A world in which the uniform innocence of the general public, just like Frank’s did, died in the jungles of, and with the young men who were sent to fight in, Vietnam. Killing’s Frank’s business, and business is good. Oorah…  Tim Cundle