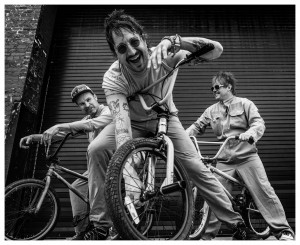 Ghost Riding finds the trio exploiting their creative smorgasbord of previous projects into an irresistible new beast. The title track – which is available for download now – is a beautiful new alt-rock symphony with orchestrated strings and the anthemic cry of, “We’re still young” resonating throughout.

On the song, Jeff Ament says, “’Ghost Riding’ embodies what we went after on this record: pushing ourselves creatively with new songwriting approaches, unique sounds, groove and uncomfortable instrumentation… Joseph wrote a great take of longing of childhood past, really beautiful words”

The 11-track album opens with the electro-industrial march of ‘Stumbling Down’ before leading into the dreamy indie-rock of ‘Comfortable’. Elsewhere, Ghost Riding holds beautiful blues ballads as found on ‘Stronger Man’ and explores funky vibrations on ‘NYC Freeks’. RNDM infuse Southern folk influence on ‘Stray’, and have recently unveiled the video.

Ghost Riding is the follow up to RNDM’s 2012 debut album Acts. It will be available on digital, CD and vinyl formats. On the day of release the band will commence a seven-date US headline tour, starting at Seattle’s The Crocodile and finishing at the Double Door, Chicago on March 15th. Full RNDM tour dates can be found at rndmband.com