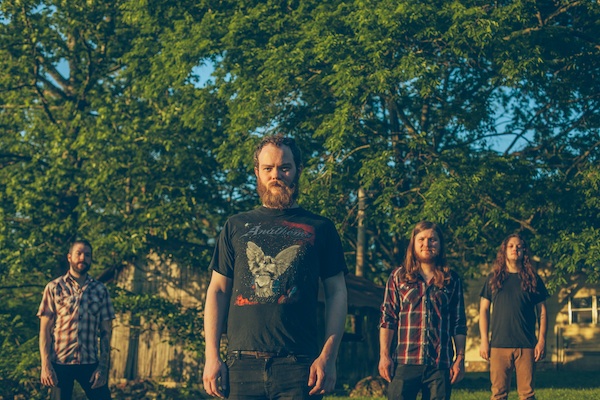 Pallbearer‘s sophomore full-length, Foundations Of Burden, was released this past August and delves even deeper into Pallbearer‘s melodic contexts, adding a new and compelling dimension to music which has long since proven itself to be inexorably captivating. The album debuted at #85 on the Billboard Top 200 Chart its first week and has been hailed as “a watermark for the genre” by Pitchfork and “one of the year’s best and most magnetic albums” by Wondering Sound. Most recently, Foundations Of Burden was named the #1 Album of 2014 by Decibel Magazine (and the band graced the cover of the magazine earlier this year as well).

Pallbearer just wrapped up the first leg of their North American headlining tour (primarily East Coast dates and an appearance at Fun Fun Fun Festival in Austin, TX), but will head right back out on December 2nd to canvas the Midwest and West Coast. Dates kick off in Oklahoma City and will end on December 19th in St. Louis. Check out the full tour routing below, which features Solstafir and Mortals supporting Pallbearer on this run. Also newsworthy is that Pallbearer‘s 2010 Demo will be available on vinyl for the first time ever on December 9th courtesy of 20 Buck Spin. Originally released as a limited CD-R and then as a more fully packaged cassette, the 2010 Demo contained the formative recordings of tracks that would appear in re-recorded form on Pallbearer‘s critically acclaimed debut album Sorrow & Extinction.

Formed in 2008 by Joseph D. Rowland (bass) and Brett Campbell (vocals/guitars), Pallbearer grew from the fertile underground metal scene of Little Rock, AR. A year after their formation, the band released their first three-song demo (with guitarist Devin Holt), which garnered well-deserved attention. Pallbearer went on to release Sorrow & Extinction in early 2012 on well-respected Canadian indie label Profound Lore, and instantly made waves among listeners and critics who found the band’s compositional paradox of vulnerability and might unparalleled in the metal world. Sorrow & Extinction proved to be an unequivocal masterpiece in any genre of music and compelled Pallbearer to reach even further creatively for what would come next.

In February of 2014, Pallbearer headed to Portland, OR (with drummer Mark Lierly) to Type Foundry Studio with legendary producer/engineer Billy Anderson (Neurosis, Melvins, Sleep, Swans) to lay down six tracks that would become Foundations Of Burden. This new album delves even deeper into Pallbearer‘s melodic contexts, which adds a new and compelling dimension to music which has long since proven itself to be inexorably captivating; if Sorrow and Extinction created massive waves in the metal scene, Foundations Of Burden will create the stuff of legends.