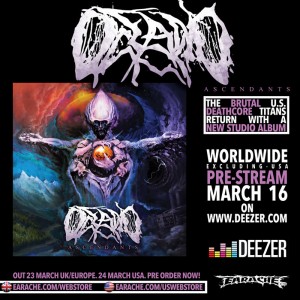 Chicago deathcore titans OCEANO have teamed up with French music streaming service Deezer for an exclusive worldwide (excluding USA) pre-stream of their new album, ‘Ascendants’, a week ahead of the album’s official release.

Listen to ‘Ascendants’ in its entirety now on Deezer.

‘Ascendants’ is due to be officially released on Monday, 23rd March in Europe and a day later in the USA via Earache Records. The album was recorded at The Nook studio in New Lenox, Illinois with producer Nick Nativo (MONSTERS). The artwork was created by Dusty Peterson (SIX FEET UNDER, BLOODBATH).