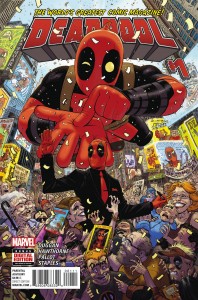 He’s annoying, he’s dangerous and he smells terrible. But the public loves him! You heard right – Wade Wilson is the world’s most popular superhero! Take that Spidey! Today, Marvel is pleased to present your new look at DEADPOOL #1, the new ongoing series from fan-favorites Gerry Duggan and Mike Hawthorne! The Merc with a Mouth is now the Man With The Fans, and Wade is loving every second of it. Not to mention he’s an Avenger now. Yes we’re serious. But what happened in the eight months since Secret Wars to make him so popular? We’re not telling here! It’s Wade’s world and we’re just living in it. Bo be there for the start of his most successful adventure yet when DEADPOOL #1 crashes comic shops this November!