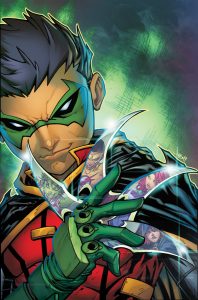 There’s still more DC Rebirth coming in September! Beast Boy, Starfire, Robin, Raven and Kid Flash are back in action!
Last to debut, but certainly not least, TEEN TITANS: REBIRTH #1 is one of the final DC Rebirth comics (along with CYBORG: REBIRTH and BATMAN BEYOND: REBIRTH) to hit shelves this fall after several months of exciting title launches. In the new series, the Teen Titans start out farther apart than ever before…until Damian Wayne recruits Starfire, Raven, Beast Boy and the new Kid Flash to join him in a fight against his own grandfather, Ra’s al Ghul! But true leadership is more than just calling the shots—is Robin really up to the task? Or will the Teen Titans dismiss this diminutive dictator?
Written by Benjamin Percy (GREEN ARROW, DETECTIVE COMICS) with cover, interior art and new character designs by Jonboy Meyers (GEN 13, SUPERGIRL), colors by Jim Charalampidis and letters by Corey Breen, TEEN TITANS: REBIRTH #1 arrives September 28th