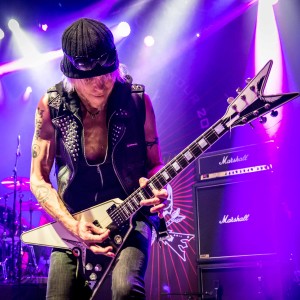 He’s seen a lot of highs… and some lows… but Michael Schenker has reshaped his musical career and re-emerged as strong as ever. His new foray in the guise of TEMPLE OF ROCK is clambering steadily to the top of the classic rock notables. New album ‘Spirit On A Mission’ sees some of his greatest playing, alongside solid rock opuses. Back on the road and keeping a strong footing Michael had some words for us here at Mass Movement.
Words: Mark Freebase

A jubilant and fresh sounding Mr Schenker answers the phone…
“Hi there Mark! I am fantastic!”

Now that’s a great start and a real pleasure to hear especially when you are chatting with one of rocks most innovative guitarists. So what set the tempo and pace for the new album?
“Well first of all we have Doogie (White) on vocals, and he is a metal guy, so that will make a big difference, alongside Francis (Buchholz) – bass, and Herman (Rarebell) – drums, both originally from the Scorpions. To add to that we have incorporated the skills of Wayne Findlay and his 7 string work. That’s pretty solid if you ask me! It’s a great little song writing team. It’s a huge step in the right direction to making Temple Of Rock it’s own entity.”

You are performing songs from across your career at the moment throughout the set as well. How long will this last?
“Well for the moment it feels the correct thing to do, but we are heading back into the studio after our UK tour [dates printed below], and some dates in Scandinavia and Russia, early 2016 we will be heading back into the studio to make the third Temple Of Rock album. So a 2017 release I expect, and a very special tour is being planned for this, although I can not specify what is happening here, we will have to keep you posted on that information.” 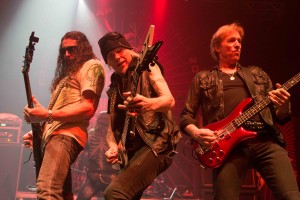 So you’re back and firing on all cylinders now then Michael?
“YEAH! I mean my life has been in three stages you know… In the beginning I was making my contribution, consciously [laughs] for the music of the 70s and 80s. In the 80s my brother Rudolph basically took over… I opened the doors for ‘Love Drive’ in the States for them, UFO was already on an arena tour there, and that lead to my middle life – experimenting with music and also developing on a personal level. Then in 2008, I guess because of my development on a personal level I was enjoying music life so tremendously I needed to find the youth of rock n roll and that lead to working with Gary Barden, and then moving onto the first Temple Of Rock album.”

How was the making of ‘Spirit On A Mission’ compared to producing records back in the 80s?
“As you know, the music industry has changed dramatically since those days [laughs]. I suppose when I go into a recording studio these days I don’t take that much notice of how the engineer operates, I’m sure they are taking advantage of modern technology. I just do what I do… regardless. I am part of the ‘hand made rock’ era, I write the way I do, I play the way I do, so whatever short cuts are available these days is probably beyond my understanding anyway! I will say things come much easier, as you don’t have to spend so much time tuning anymore; I mean I reckon I used to spend 70% of my studio time doing this. Seriously only 30% playing in the old days. It was a nightmare, machines breaking down, or a whole tape of recording gets eaten by the machine itself, there wasn’t today’s efficiency. Things are much easier now. That’s less pressure for all involved, so it’s beneficial for expressing what’s in mind. Maybe some of the newer musicians have come a little bit more lazy with this [laughs]. They could be born into that era where it is easy to fix things. Although having said that, there is no right or no wrong as its all about the end product and development of what we do”. 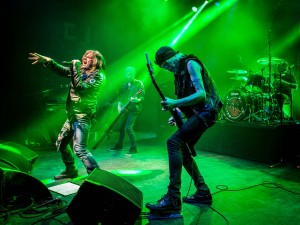 Does budget make a big impact with records now?
“Things were very lavish in the 80s, yes. But I have a record deal that is good, and I’m pleased, so we are using that to establish Temple Of Rock. Of course it helps that we don’t have to spend the time in the studio due to modern recording and production methods, but it depends what you want to accomplish. I think finances are a part also obviously. The budget isn’t that important over the end product, and I have a good studio and a great team to work with, so things are easier, definitely”.

Do you consider yourself as part of any music scene?
“I have stopped listening to music for 43 years now, and I am a creator, not a control guy. I stopped copying music when I was 17, so I just fit in where I fit in basically. What I am doing is all about self-expression. I have always walked my own way, and I never really suffered if styles changed. I never even though if ‘it’ was ever going to be commercially successful; I just keep doing what I am doing for my own pleasure”.

What’s your thoughts on ‘classic’ rock being so popular again? As it hit rock bottom during the 90s…
“It comes in loops. It comes in waves. It always has since I started playing guitar. It always comes and goes, comes and goes. But the people who really love what they do are sticking with it, the musicians that are into it, and they survive all of those ups and downs. There is a generation that is still alive. The sad thing that is noticeable is the fact of many musicians of our era passing away, that’s a saddening point for everyone. That’s why I feel the way I do at present. I also remember when I fell in love with Led Zeppelin, Deep Purple and Black Sabbath. This incredible music style has had a positive effect on so many people. I want to be here to celebrate this era as well as bringing guitar playing to the next level. One day all of this period will be just memory…”. 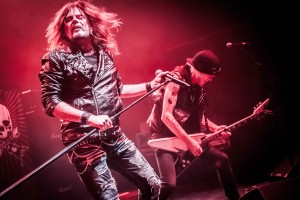 So after such a lengthy and eventful career, what inspires Michael Schenker to carry on writing music?
“I’m truly fascinated with what you can do with the guitar. It’s that simple Mark. The guitar is also the best instrument for self-expression in my personal opinion. I try and discover every day. This is just so enjoyable and fulfilling. I have not reached my boundaries yet; I want to take it further. Check out the howler on ‘Something Of The Night’ that crazy weird sound… its difficult to play, but it can be done”.

I have to ask how solid this line-up is for you?
“This is the band. We will record the new Temple Of Rock record together. I have played with some of the best musicians in the world, and these guys know exactly what they are doing. They give me a solid screen to paint on. So they all have to be a part of it. Doogie and myself are very, very creative opposite pawns [laughs] so that gives depth, and with Wayne we have plenty to work on. Temple Of Rock is creating its own sound and the next record promises to be very special”.

‘Spirit On A Mission’ is out via inakustik.