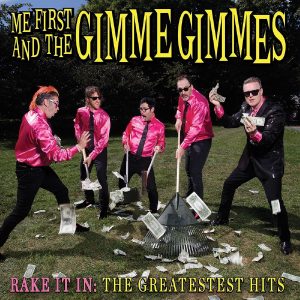 Show me a punker who claims that they don’t like the Gimme Gimmes and I’ll show you a bare-faced bullshitter and loud mouthed liar. If these guys don’t make you want to throw caution to the wind, drink like a mad drinking thing, dance like your dad does after he’s spent a weekend binging on cheap speed, sing like your heart was about to explode  and embrace your inner couldn’t-give-a-shit-what-anyone-else-thinks fun time you (the one that you have to keep hidden during the “cut and thrust” of the nine to five suck ass working week) then I’m sorry, but you’re already dead.  You just don’t know it yet.  If these dudes have recorded a bad tune, then I ain’t heard it and given that Rake It In is their best of the best (kinda like that eighties Eric Roberts martial arts flick but with added punk rock goodness, pizazz and a whole butt load of cool), then you know it’s got to be pretty awesome. And it is. In fact it’s even more awesome than you think it is. Come on, you know what these guys do, the take the “classics” punk them up and make them a hundred times better. In fact, that’s exactly how good this record is. It’s a hundred good, and on the good scale, that’s right up there with the best of them. Get your dancing shoes on; the Gimme Gimmes are here…. Tim Cundle