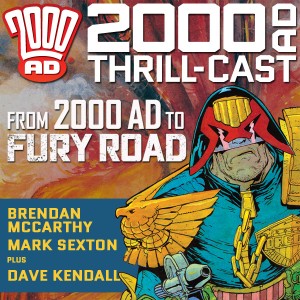 From George Miller’s pre-storyboarding ritual to the real-life drugs that inspired the War Boys’ chrome spray, the new 2000 AD Thrill-Cast looks at the surprising links between the Galaxy’s Greatest Comic and the hit movie of 2015.

In a bumper episode of the official 2000 AD podcast, Michael Molcher and Matt Smith from 2000 AD talk to artists Brendan McCarthy and Mark Sexton about working on Mad Max: Fury Road and the film’s links to the epic Oz storyline and the Judge Dredd universe.

Based on an idea by McCarthy, who co-wrote Fury Road as well as producing storyboards and concept work, the Oz storyline took place in the Australia of Judge Dredd’s world and saw McCarthy’s outlandish ideas – the renegade clone Judges called The Judda, the dangerously violent skysurfing championship, and the mutants of the irradiated Radback – brought to life. Together with Miller and Sexton, they brought a real taste of the Cursed Earth to the critically-acclaimed movie.

This episode also features Dave Kendall talking about his new Dark Judges series, Dreams of Deadworld, which sees him re-imagine John Wagner and Brian Bolland’s iconic villains, including the terrifying dream that inspired him to create the series!