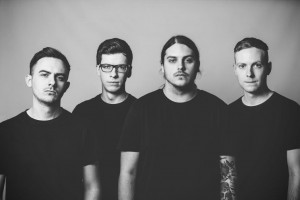 Check out the teaser here.

Hailing from the heart of England, LAY SIEGE fuse the sounds of metalcore, post-metal and sludge to create their own brand of suffocatingly heavy music riddled with heart and depth. The album follows on from LAY SIEGE’S 2012 six track EP “Obulus” which gained supported from the likes of Kerrang! Radio, Scuzz TV and Rock Sound magazine. Having stepped it up another notch, ‘hopeisnowhere’ is a heart bruising journey exemplified by merciless throat-shredding vocals erupting over riff-orientated raging guitars. This is modern metal with no compromises, just presence.

Vocalist Carl Brown commented:
“We are beyond excited to have signed to Lifeforce Records and to be joining so many great bands past and present on the label. This album has been a long time coming so to finally have it released and through a label like Lifeforce is amazing for us. We’re all extremely proud of the songs and also of the sound of the album and we can’t wait to share it with everyone.”

Stefan Luedicke of Lifeforce records commented:
“I’m really looking forward to work with one of UK’s most exciting new bands and I’m sure folks out there will love Lay Siege’s new album as much as I do.”