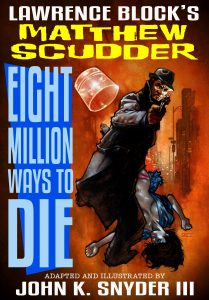 Adapted in highly detailed noir fashion by Eisner-nominated artist John K. Snyder III, with letters by Frank Cvetkovic, this marks the first graphic-novel adaptation of Block’s work and his character Matthew Scudder, who has appeared in seventeen novels since his debut over four decades ago and has remained popular ever since, inspiring two feature film adaptations.

“The work of Lawrence Block, with its crime noir settings and lively, realistic dialogue and characters, poised a perfect subject to meet the challenge of creating something different for the ever-growing graphic novel audience,” said Snyder, who adapts, pencils, inks, and colors this lush graphic novel. “This story contains all the classic entertaining elements of pulp noir, and Matthew Scudder embodies the traditional aspects of a classic private detective. It’s an honor to to adapt a work that has been so revered and to have the opportunity to bring Matthew Scudder to the comics page for the first time.”

The book was originally published in 1982 and depicts New York City as it was in that time—a very violent city with an astronomical crime rate, as shown through Scudder’s eyes. A seemingly simple assignment turns into a deep mystery and trail of bodies ending in a series of life-changing (and for some, life-ending) conclusions.

“With Scudder, I was operating at a different level of realism. I liked Matthew Scudder, and found his personality of unceasing interest and his voice an engaging one in which to write.” – Excerpt from the Afterword by Lawrence Block

A powerful new entry in the IDW library following in the footsteps of the ground-breaking PARKER series, EIGHT MILLION WAYS TO DIE is now available for pre-order and will go on sale JUNE 2018.