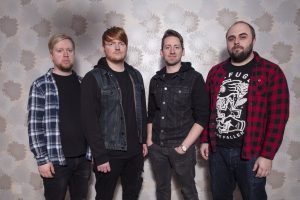 South West based ‘Polite-Post-Hardcore’ quartet, Lastoneout are back with their new mini album, ‘This Was Never My Story, It’s Yours’, featuring 7 tracks capable of filling the huge hole left in the UK scene by Funeral For A Friend’s departure earlier this year.

Speaking on the record, guitarist Liam West said, “When we decided to start writing and recording for this mini album, we knew we wanted to push ourselves further than we had before. We spent months agonizing over each individual part of each song, while leaving enough open to let things naturally happen in the studio. We are incredibly proud of what has come out of it.”

‘This Was Never My Story, It’s Yours’ was recorded, produced and mastered by Ross Rothero Bourge at Cube Recording in Truro.

We all remember that one thing that we discovered in our mid-teens which would define who we would be until at least our early twenties. For some that was sport, others it was art, but for the Plymouth-based quartet, Lastoneout it was music, more specifically… ‘Emo’. Although at the time you would never admit to it, Emo music was the biggest thing in the mid 00’s, and for the members of Lastoneout, it soundtracked their day to day lives.

The mid 00’s Emo persuasion is clear to hear in Lastoneout’s new mini album, ‘This Was Never My Story, It’s Yours’. Bands like Funeral For A Friend, My Chemical Romance, Fall Out Boy and Story Of The Year can be heard, seeping through as influences throughout the 7 tracks. ‘This Was Never My Story, It’s Yours’, is much more than a heartfelt tribute to that scene though – It’s Lastoneout’s attempt at keeping the genre alive, and demonstrates the desire and drive to recreate the energy and passion of those who came before them, and inspire the next generation.

Having already made considerable noise across the south-west, the band have already built a name for themselves as ones to watch. With a live show that captures the energy and passion of an early 00’s underground show but with all the precision and power of the modern alternative music scene, the band are always sure to put on an exciting show, no matter where they play.

The new mini album ‘This Was Never My Story, It’s Yours’ will be released on the 4th November through all usual digital retailers and is available to pre-order here: https://lastoneoutuk.bandcamp.com/