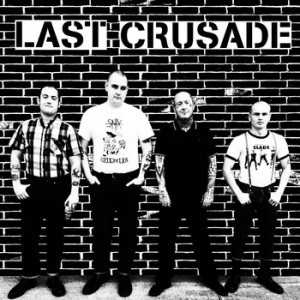 Last Crusade – S/T 7″ (Rebellion)
UK based Last Crusade recorded a demo that Rebellion records considered too good to miss out on and promptly pressed it up onto limited 7″ vinyl. The style and sound on here is pretty different to what most UK bands go for. Instead of the more typical Sparrer, Rejects, Sham etc influences, these guys have looked further afield and concocted a mix of French and US oi! sounds. With vocalist/ guitarist Karl hailing from Canada this transatlantic marriage of sounds makes more sense and just to pound it in, the last song is a quality cover of Warrior Kids’ “Personne”. For the US influences, think early Templars or Bruisers, with a very clean sounding guitar, lofi recording and vocals that spit venom. The French flavour comes in form of those unique melodies that you heard time and time again from bands like Camera Silens, Komintern Setc or more recently Maraboots. This is a promising start from a band that is so new they’ve yet to even play a gig. Rough around the edges but streetwise. The waves they are already making tell me this is a name we will be hearing more from. Tom Chapman