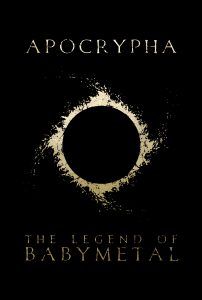 There’s no band in the world like BABYMETAL, the metal dance unit, whose hit songs like “KARATE,” “Gimme Chocolate,” and “Megitsune” have captured the imaginations of fans around the globe. This fall, Z2 Comics, Hollywood film/TV production company Amuse Group USA, and BABYMETAL’s producer KOBAMETAL are collaborating on a brand new, original story for the graphic novel APOCRYPHA: THE LEGEND OF BABYMETAL, featuring art by award-winning illustrator GMB Chomichuk.

Formed in 2010, BABYMETAL is a metal dance unit made up of three performers, SU-METAL, YUIMETAL, and MOAMETAL. With their combination of powerful metal sound and dance performances, they are by far the most unique band out there. Since its inception, the Japanese metal dance unit has developed a devoted fan base that describes their concerts as both energetic and unforgettable. The band has received glowing praise from the industry’s top acts, including Slipknot’s Corey Taylor, Guns N’ Roses’ Slash and Rob Zombie, who told Billboard that BABYMETAL “are like nothing I’ve ever seen before.” BABYMETAL is making waves in the music industry with their chart-topping albums that have solidified their cross continent success.

The book will be published by innovative independent graphic novel publisher Z2 Comics, who has previously collaborated on acclaimed music-inspired graphic novels with the likes of rockstar Dan Auerbach, bluesman Robert Finley and the Music Maker Foundation, platinum selling DJ Paul Oakenfold and jazz musician Dave Chisholm. “With the book still months from publication, it’s too early to reveal much,” said Z2 Comics Co-Publisher Sridhar Reddy. “In the months to come, BABYMETAL fans can expect more announcements, but today I would say the question we should be asking is not who is BABYMETAL, but what is BABYMETAL?’”

*Besides the cover design, the special cover edition will be identical to the standard version