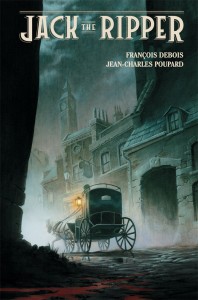 Dark Horse Books release of Jack The Ripper is another in a long line of books, both prose and sequential-art, that tells the story of the infamous murders that occurred in Whitechapel, England. However, what is different about ‘Jack The Ripper’ is that it adds variation to the story by focusing on both the events in London and the murders that happened in Paris, France during a lull in the Ripper killings. Inspector Frederick Abberline who was investigating the murders, while side stepping lynch mobs and politics, cannot let the case go and after the murders stop, but the perpetrator remains at large, he continues his pursuit. He decides to start investigating the murders that are happening in Paris, murders that bear an uncomfortable similarity to those that happened in London.

French writer Francois Debois tries to make this tale of the Ripper killings different, and by moving the story to Paris he succeeds somewhat. Yet the story is sluggish and slow paced, which was a problem with another well-known sequential telling of Jack the Ripper. When the story takes me two days to get through the first 30 plus pages, I can’t help feeling that the pacing has a few problems. What saves this book though, is the art from Jean-Charles Poupard. Poupard’s artwork is reminiscent of the classic Creepy and Eerie comic magazines from the 1970’s and while his work is clean looking, it also has a little grime which adds a sense of place, drama and period detail to the tale. While the pace of the story is problematic, the artwork becomes the focus of the reader’s attention, and in doing so, becomes the main reason to read Jack The Ripper, which is prosaically slow, but artistically amazing. Jason Bonton