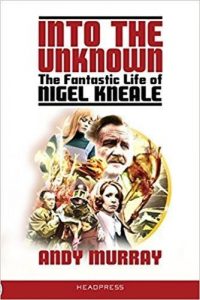 Andy Murray’s thoroughly researched and interview-rich biography of probably the greatest writer of television fantasy this country has known (although Kneale was originally from the Isle Of Man) fails to provide these nuggets of information, but there are more … many, many more to be found inside. In what is a revised and expanded edition of Murray’s original work from 2006 (which, incidentally, I think had a superior cover, echoing the old Penguin script tie-ins) few of the Stone Tapes – cough – of Kneale’s extraordinary life and career are left unturned. So few, in fact, you’re left wishing there won’t be a further expansion, lest you discover what colour underpants Nigel’s parents’ postman wore, or whether the family cat was one of the eight or two of ten who did or didn’t prefer Whiskas. Okay, it doesn’t get that bad, but there is, perhaps, a slight lesson for Murray and editors at Headpress to learn here, which is that whilst your research may indeed be thorough, you do not need to include everything you have thoroughly researched. Such practice makes for a sometimes over-stuffed read which brings things dangerously close to auto-skip at times, but this is in part because Murray falls into that most easily concealed of biographer’s traps, that of relating events too chronologically. With this kind of stew, there’s nothing wrong with bringing some of the meatier bits to the surface early by giving history a bit of a stir.

But don’t let the book’s linearity put you off. There are treats aplenty awaiting within, including details of a certain enviable souvenir Kneale kept for decades in his office. My favourites, though, are the misadventures of a shit-faced Brian Donlevy (“the dreaded Donlevy!”) whilst filming Hammer’s Quatermass Xperiment and Quatermass II between visits to the pub, and, in terms of photographic memorabilia, the Tony Hart – yes, he of Vision On – designed invitation for the wrap party of the TV Quatermass And The Pit. It was held in the Bandroom, Riverside, at a quarter to nine on the 26th of January, you know. I’ll bet John Carpenter, Ramsey Campbell and Grant Morrison, who, with others herein, offer their own appreciative thoughts on Kneale’s talents, wish they could have been there. I know I do.

One slight huffity-puffity. You’d think given the years between the two editions that someone would have spotted the typo on the very first page. In what is otherwise such a professional piece of work, this is a bit of a shame – but, hey, these things happen to the best of us. Fact is, this book would not – could not – have been published without the dedication of both Andy Murray and Headpress, and they should be applauded for chronicling the life and work of one of the earliest, most enduring and certainly finest architects of the imagination to excite and haunt our screens. It’s a must read for any fan of Kneale’s, or of television history, and the fact that it exists is more than good enough for me.

Now, back to that fruit. I’ve an adventure in mind. Gonna call it Quatermass And The Pip. Mike Wild