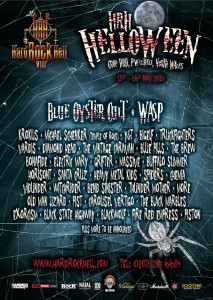 So the regular UK festival, which is fastly establishing itself as one of the premium rock places to ‘go’, returned to make a cold November weekend a very pleasant experience. Hosted in it’s usual surroundings Pwllheli, Wales, the perfect accommodation for what was to become a weekend of rock and metal was once again self contained, banging with atmosphere, and totally sold out!

Being unfortunate enough to miss the performance of U.S. shockers Lizzy Borden, on the opening Thursday evening, I was left to make to lengthy drive up after the school run ready for the openings of Saturday’s party. Having been a part of many HRH outings before, I was well aware of the quality time ahead.

Saturday’s proceedings kicked off with The Texas Flood pounding some life into the main arena, delivering a blasting set that seemed to shake the hangovers from many around. Santa Cruz had the chance to shove their energetic US rock down everyone’s throats, and seemed to make a welcome impression as they followed to a swelling multitude of devoted fanatics. Utilising every inch of the stage, and bringing the crowd participation up a notch, it was time to get day two of the HRH party well and truly underway. On stage two it was The Amorettes that got a very impressive welcome. The girl trio played a storming set, showing their love of rock, and ability to bash out a tune or two. Since first witnessing these girls, a massive enhancement on performance has seen them able to kick out a superb set, could they be the Girlschool / Rock Goddess of the new millennium? Well worth checking out; and lapped up by a rabid audience. Crossing the site again I was keen to catch the last half of Buffalo Summer’s main stage appearance… it was a stellar set of classic rock, these local boys could hold a tune, and can create a song that encompasses mature characterises with comparisons to The Answer – just a shame the crowd was not as strong, but playing the same time as the rockin’ female trio is going to be a tough slot. It was then all heads down rock at the main stage from this point in, as with the line up that was to follow, many were going to be firmly rooted. New UK hopefuls The Brew played a carefully crafted set, which sat well at this point of the day. Good tunes, and great musicianship that has seen these boys tread the boards in many a club over the last year – a UK band to watch out for.

Y&T were the true kings of today’s festivities without a doubt though. Never has the main arena been so packed out for a band. A mass influx of bodies accumulated to hear a set that included so many classics, only an hour long encore would have been suffice, as Dave and the boys had Camp HRH eating well and truly out of their hands. The inevitably hard job of following such popularity was given to Krokus, but it’s a job the Swiss rockers accomplished with ease. Belting out classic tracks from the 70s and 80s, and showing the slightly less crammed arena how it should be done left those new to the cult metal legends with no doubt of their abilities. A stunning performance. Sadly, probably the biggest disappointment of the day came with Queensryche… with only an original drummer, and a set that was less than ‘classic’ it was a lot more under par than the expectant crowd wanted. With no Geoff Tate in tow it was not the performance many were waiting too see. Note perfect, but lacking atmospherics unfortunately.

After a comfortable nights sleep in the relatively respectable surroundings of the clean chalet (anyone remember the grim pre-site of HRH?) it was time to stagger off to local boozer ‘Mash and Barrel’ for a hearty full breaky, at a very reasonable price too, now this is where HRH racks up extra punter points for keeping all needs in house, and at relevant prices.

So first venture of the day music wise was to catch Brighton based rockers Black State Highway and proving that they can clearly reproduce the sounds of their stunning debut album left an impressionable stance with the sizeable crowd they attracted. In the main arena Blues Pills casually set their surroundings in front of a growing crowd. The buzz regarding this band at current is phenomenal, so I was surprised to see a less than packed venue. Storming through a powerful set of stunning guitar work, and heartfelt vocals, anyone who didn’t catch these guys really did miss out on one of the bands of the day. Once again it was a main stage onslaught, which was to be set upon all present. Truckfighters delivered a suitably Southern sound to a dark afternoon, grabbing the attention of many, and rockin’ out a set of songs that gave the buzzing attendees a real grooving feel.

It was however the return of NWOBHM stalwarts Vardis who were to turn the heads of many, as the sounds of their trad-metal blasting echoed around the hall. Probably the most talked about band of the weekend from what I could gather, and still capable of delivering a 100mph set for those in attendance. As the evening draws closer, it was the dual-Hammond led Big Elf that saw an influx of bodies and the start of something retro begin. Their sounds of the past mixed with contemporary subtleties saw them play a show which had the HRH crowds whipped up in a vortex of nostalgia – thoroughly enjoyable. As Michael Schenker’s Temple Of Rock hit the stage things drifted perfectly into an ambience of solid guitar work, classic rock as it was truly meant to be played. Backed by the talents of Scottish vocalist Dougie White, and drummer Herman ‘Ze German’ Rarebell a solid set of Scorpions and UFO classics was mixed amongst solo offerings, definitely a weekend highlight. The second biggest crowd of the weekend went with

Blue Oyster Cult, and their brand of radio friendly American rock went down a complete storm with the likes of ‘Don’t Fear The Reaper’ and ‘Godzilla’ pleasing all in attendance. Clearly not just a band for the older rockers, and clearly still capable of cutting the mark.

Girlschool had a tough act to follow, but the London lasses pulled a bag load of classics from their repertoire and delivered an astounding set to a busy crowd, great to see a return to glory, let’s hope it continues for them; as they all seemed confident and happy to be up on the large stage, making full use of the opportunity. As the night was drawing to a close, it was down to youngsters, and Nuclear Blast signings Vintage Caravan to bring a close to the festivities. Not fazed by the dwindling crowds, the Icelandic rockers focused on honing an energetic and interesting show demonstrating why they have become a major talking point in the rock and metal press, just maybe next time an earlier slot would be preferred…

Those that lasted the entirety of the days were witness to a weekend of greatness. So many good bands, such a great set up, and a real easy vibe throughout the confines of Camp HRH. The future of festivals may lie in this ‘niche’ market. Mark Freebase