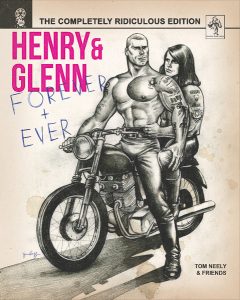 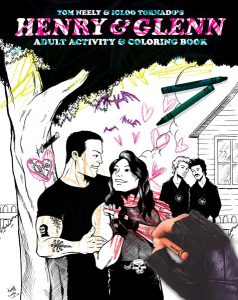 Twenty short comic stories about the domestic life of “Henry” and “Glenn” and sometimes their neighbors “Daryl” and “John.” Glenn deals with issues with his mother while Henry shows off his darker side and indifference. These are two men who truly suffer best together.

This book collects the entire series for the first time, adds even more never-before-published-pages, and features a spiffy hardcover to truly make this edition a complete (-ly ridiculous) collector’s edition!

Love is so metal.

Get pumped on inspirational love with the coloring book of the century, celebrating the romance of the millennium: Henry & Glenn Forever. Bust out your rainbow crayons and make your own mark on the story of two tough men learning to express their emotions together.

The Henry & Glenn comic books have been wildly popular since their first publication in 2010, selling over 100,000 copies of various editions, and now fans can color their idols, including new content!

Praise for the Henry & Glenn series:

“One of my favorite uses of satire is a comic book that depicts me in a romantic relationship with rock vocalist Glenn Danzig. I have never opened a copy; I am happy to live the rest of my life never knowing what happens to the two of us in those pages. I am told that in the story, our neighbors are Hall and Oates! If I were to find that anything less than hilarious, then I am in the wrong business.”  – Henry Rollins, LA Weekly

“I didn’t think it was very funny. I thought it was a very crappy, opportunistic book. People are extremely stupid.”  -Glenn Danzig, in an interview with Rolling Stone

“I wouldn’t be the neighbor, but I’d be in the Satanic cult!”  – Daryl Hall

“An unauthorized work of fantasy, but so are the ‘official’ personas of Rollins and Danzig.” – LA Weekly

“What if Henry Rollins and Glenn Danzig were a gay couple who lived together?”  – VICE

“File under ‘ludicrously awesome’.” – Just Out

Signed and numbered dust jacket in a limited edition of 1,000!