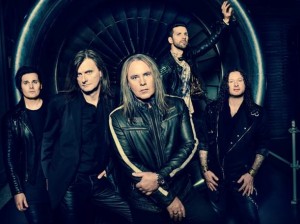 HELLOWEEN are one of the most influential and internationally successful acts of the global metal scene. With the release of their 15th studio album My God-Given Right, due on June 1st, the Pumpkin Heads are set to further cement their title as the founding fathers of German melodic speed metal.

Director Oliver Sommer (AVA Studios) comments: ″The story tells itself with the first look on the artwork: it seems to be a film still and you only have to press the play-button…So the female protagonist flees – reminiscences to different (post)apocalyptic films and stories are deliberated – from an army of robotic pumpkin soldiers through an empty world. On the other side, the band performs in frightfully beautiful, rocked out ambience. When the tough girl realises that she won’t escape, she turns around and kills her chasers with a grenade which looks like the torch from the Statue of Liberty… it is immersed in snow on the cover artwork and in sand in the clip. Our post-apocalyptic world is a white desert, which exists in reality in Germany. The industrial disaster area, our hero is fleeing in and the band is performing in, is an incredible and giant area of the ex-steelworks (heavy metal!) Maxhütte – both locations are real wastelands…!″

The Limited Edition Digipack (with special 3D cover) and vinyl versions will feature two bonus tracks:
14. I Wish I Were There
15. Wicked Game

The Limited Edition Earbook will feature an extra CD with four bonus tracks:
01. I Wish I Were There
02. Wicked Game
03. Nightmare
04. More Than A Lifetime

Please note: The above trailer is in German but has been translated and subtitled for English speakers.